Project Evo is said to 'push the boundaries of personal computing' 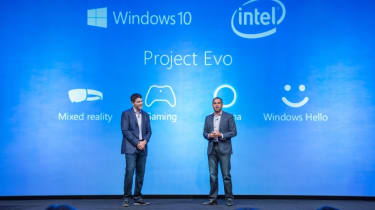 Microsoft has teamed up with chip giant Intel to "push the boundaries of personal computing" through a new initiative the firms are calling Project Evo.

Announced at the Windows Hardware Engineering Community event (WinHEC) in Shenzhen, China, Project Evo is said to deliver "all-new ways for devices to light up with the latest in advanced security, artificial intelligence and Cortana, mixed reality, and gaming".

In practice, that refers to an inclusion of far-field speech communications, so you could ask Cortana a question or play a song from across the room. A bit like the Amazon Echo or Google Now, it is an effort to further propel the way we interact with computers across a broad range of applications.

Microsoft and Intel said the collaboration will bring on board a number of features from both of the companies' innovation lines, such as: the latest security capabilities to protect devices from malware and hacking threats; advances in biometric authentication with Windows Hello; sophisticated insights from Microsoft's Intelligent Security Graph; and additional security intelligence and analytics from Intel.

"Through [the] new initiative, we are harnessing our collective innovation to showcase what is uniquely possible with the PC and, together, set the course for the future," said Intel's Navin Shenoy, senior vice president and general manager for the firm's Client Computing Group.

"We believe that computing must evolve to become capable of even more unbelievable things, including smarter voice interaction, virtual and merged reality experiences for all, more powerful gaming, strengthened security and identity protection, and true always-connected computing."

The tech giants are also hoping the project will bring mixed-reality experiences to everyone through affordable PCs and head-mounted displays that blend the physical and virtual realities in ways no other platform can.

This, Intel said, will allow for new innovations in gaming, such as eSports, game broadcasting, and support for 4K, High Dynamic Range, Wide Color Gamut, spatial audio, and Xbox controllers with native Bluetooth. This is no doubt in line with Intel's "merged reality" vision, a platform which was announced earlier this year at the company's IDF conference in San Francisco claiming to be the future of VR.

The Project Alloy headset is an all-in-one unit, with the computational hardware built into the device. This means that users can fully roam around a virtual environment without the need to be connected to a PC. Unlike the HTC Vive, Project Alloy's 'merged reality' is made possible by Intel RealSense cameras attached to the headset and is not dependent on setting up any external sensors or cameras around the room.

Intel claims that merged reality will be able to provide full-motion virtual reality experiences without "the cost - and creep factor - of installing high-end sensors in every corner of your living room". Merged reality will also allow players to use their actual hands to manipulate objects in VR, rather than controllers - technology already being worked on by companies such as Leap Motion.