AMD rises from the dead with a multi-core powerhouse 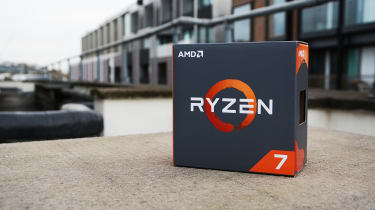 It's also unlocked for overclocking, a quality shared across the entire Ryzen range. However, the way AMD approaches this has proven slightly odd.

Firstly, our review pack only included a mid-sized 120mm air cooler, a variant of Noctua's NH-U12S. Such a component just isn't ideal for pushing clock speeds, full stop, and none of our own watercoolers fitted the AM4 socket. Secondly, overclocking - either in the BIOS or through AMD's Ryzen Master software (more on this later) - will disable XFR and Precision Boost.

It seems these do a surprising amount of heavy lifting at stock speeds, as although we could easily get the base speeds up to 3.9GHz, the resulting overall benchmark score actually dropped seven points to 208, with only the image score avoiding a hit at 144. We're not convinced that there's much throttling going on either, as temperatures peaked at 88c, which is within the 1800X's acceptable thermal limits.

It's likely that you can make up (and exceed) the difference by pushing clock speeds further, but an additional nudge to 4.0GHz proved too much for the modest cooler, and caused our benchmarks to crash. Looking online, it's apparent that 4.2GHz is still a realistic target with watercooling - and we've personally witnessed AMD engineers go all the way to 5.2GHz, albeit with the aid of liquid nitrogen. Hopefully we'll get a compatible liquid cooler in soon, so we can truly see what the 1800X is capable of.

This should also help with the CPU's thoroughly mixed thermal performance on air cooling. When idling, we recorded core temperatures of 51c and 52c at 3.6GHz and 3.9GHz respectively - that's very high for a processor which isn't really doing anything. We expected this to mean unnervingly high load temperatures as well, but here the 1800X surprises in a much better way - even when strained, it peaked at a reasonable 81c at 3.6GHz and 88c at 3.9GHz. Considering Intel's latest Kaby Lake chips can hit 100c after even a whiff of overclocking, that's not too shabby. 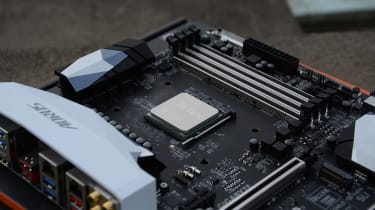 Overclocking is a potential solution if you want to squeeze more single-core performance out of the 1800X, as long as you've got a good watercooler to keep things stable past 4.0GHz. For those who might be intimidated by poking around in the BIOS, AMD has created the rather nifty Ryzen Master software; like the simplified overclocking utilities you often get with graphics cards, this provides a relatively easy-to-grasp set of controls for things like clock speeds, voltages and voltage overrides, with the option to save several profiles and switch between them without needing to restart.

There's no tutorial, so you will need at least a bit of overclocking knowledge, but it's straightforward and convenient enough to be worth a try if you've yet to dip your toes in PC tuning.

There is a catch, though: we've already mentioned that overclocking via Ryzen Master will disable the genuinely effective XFR and Precision Boost features, but the full truth is that merely opening the software will switch them off as well. We confirmed this by keeping all the default settings enabled - effectively running at stock 3.6GHz speeds - and running our benchmarks with Ryzen Master in the background, ending up with an overall score of 200, a 7.5% drop. Admittedly it's unlikely that anyone would run overclocking software only to ignore its functions, but it's still peculiar that a utility for boosting performance can actually harm it.

Frankly, though, the Ryzen 7 1800X is a wonderful workstation chip even at stock speeds. For productivity, there's simply no Intel alternative that comes close to it in terms of value for money. Single-core performance isn't quite a match for Intel's chips yet, but if you're looking to take on any kind of video editing, multitasking or 3D modelling applications, the Ryzen 7 1800X simply trounces the competition, and at less than half the price too.

In any case, it's satisfying that Ryzen has finally brought back some competition to the CPU market - and that's good news for all parties, especially if it means we get more like this.