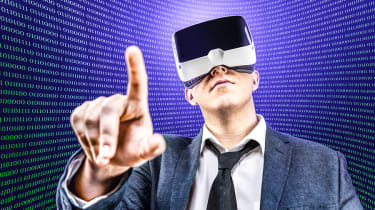 Logitech is working alongside HTC to develop a virtual reality keyboard that could solve the problem of text entry in virtual environments.

The set-up comprises a Logitech G gaming keyboard, an accessory to integrate HTC's Vive Tracker on the keyboard and software to power the hardware package. Initial tests mean it works across the Steam VR system, overlaying a virtual representation of a keyboard in a VR application, with real-life feedback when a key is presses in the virtual world.

Logitech has said it's planning to test the equipment with the help of 50 developers who can create "compelling" experiences for end users.

"During our initial explorations of VR, we were struck by the fact that keyboard use and text entry were necessary but not natural and we've heard similar complaints from others," Vincent Tucker, director of innovations and strategy at Logitech, said.

"Our motivation comes from the research-backed understanding that in certain situations the user still needs a keyboard to interact with applications, particularly in productivity-driven or desktop scenarios, but also in games, social applications and content browsing."

The company has invited developers interested in taking part to apply for one of the 50 places on its developer programme, although only US-based individuals are eligible. Logitech said it would offer out more development kits if these first trials prove successful.

BBC Taster has launched a virtual reality app available for free on Android and iOS.

The app currently contains content from BBC Three and Planet Earth II, with more content expected to be added from across the BBC soon.

The BBC is aiming to put its early and experimental ideas in the hands of audiences. There will be a variety of content including animated VR, interactive 360 videos, dynamic binaural audio and branching narratives where users decide which path to follow in a story.

The first pieces of VR to be published is a trailer for the BBC Three documentary One Deadly Weekend in America, a VR experience about gun crime, and also interactive 360 content from Planet Earth II.

Our VR app is here! Great content from @bbcthree and @BBCEarth and there's plenty more to come. Find it on Taster https://t.co/FG8vD90Jdx pic.twitter.com/NPdeQb9j10

Controller at BBC Three Damian Kavanagh said in a press release that the BBC is exploring new technologies to tell stories that will engage its audience.

He underlined that the new VR trailer is a fantastic first step for the company: "Using virtual reality it literally puts the audience in the shoes of the victims of gun crime featured in our truly brilliant feature-length documentary, One Deadly Weekend in America. It's the first time the BBC has ever used VR in this way, and offers a whole new way to engage an audience."

BBC Taster VR was developed using technology from EEVO, a company which helps to build VR apps, so that the BBC can learn more about how its audience uses this new technology. Along with user feedback the app provides analytics and VR heat maps to highlight where users are looking when in virtual reality. BBC developers and editorial teams hope to learn more from their content in order to tailor it and refine storytelling techniques in the future.

Google may be looking to significantly ramp up its VR and AR efforts, new job postings suggest.

The tech giant released its first major consumer VR product last year, in the form of its Daydream View headset. However, while this was more akin to a proof-of-concept than a mainstream device, recruitment efforts spotted by Road To VR have indicated that Google could be building up to releasing a mass-market VR headset.

Earlier in the year, the company was spotted recruiting for roles on its VR and AR team who had "experience supporting high-volume overseas manufacturing builds" and could "lead electrical hardware development for consumer electronic products from concept into production".

While Google has yet to confirm the development of a new headset, the new hires imply that the company is looking at a much more significant investment in VR/AR technology than it has previously made - potentially a standalone VR headset, or even a successor to the original Google Glass.