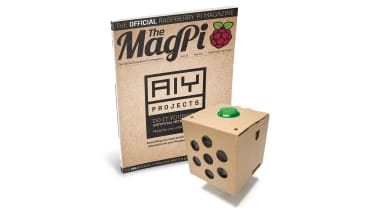 Raspberry Pi fans, rejoice; the microcomputer's official magazine is giving away free AI kits as part of a new partnership with Google.

The MagPi, a monthly publication offering tips, tricks and tutorials for fans, made headlines last year when it gave away a free Raspberry Pi Zero on the cover of every copy to celebrate the device's launch.

This month, the magazine is going one better, offering an AI kit with every copy to let users build their own Google voice-powered projects.

As part of a freshly-announced partnership with Google dubbed AIY Projects (short for Artificial Intelligence Yourself), The MagPi is launching a new add-on board for the Raspberry Pi called the Voice HAT (Hardware Accessory on Top), allowing makers to integrate artificial intelligence and natural language processing into their projects.

"We are moving to a human interface world where users will simply have a conversation with a device," said Google's director of AIY Projects, Billy Rutledge. "Google wants to help makers familiarise themselves with voice interfaces, but we're also keen to tap into the creative prowess of the maker community. We want to learn what this community needs, and work with them to build the tools they want to encourage a new era of 'intelligent devices'."

Along with the Voice HAT, readers will receive everything they need to build their own voice-controlled AI projects, including a speaker, stereo microphone, buttons, cables and even a cardboard housing. 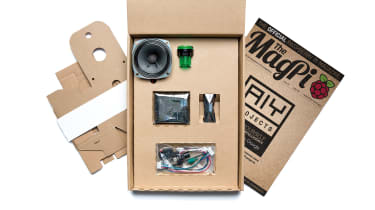 The kit allows makers to access the Google Assistant SDK that powers devices like the Google Pixel and Google Home, as well as Google's Cloud Speech API for recognising and processing voice commands which can then be used for tasks like controlling robots or programming home automation functions.

Pi founder Eben Upton told IT Pro:"It's a great vote of confidence in Raspberry Pi and The MagPi."

"We've had a fantastic time working with the AIY team on this: we did post a picture of us all on Twitter about a month ago, but nobody could quite figure out what we were up to."

"The base Voice Assistant project is exciting enough," he added, "but personally I'm looking forward to seeing what happens when people take the hardware and embed it into robot projects: there the ability to teach it custom phrases will really come into its own."

The latest issue of The MagPi will be on sale at its usual cover price of 5.99. The MagPi has confirmed that it hopes to release the included Voice HAT kit separately at a later date, but pricing and availability are yet to be confirmed.

The MagPi's Raspberry Pi Zero launch issue was a notable sellout, with determined tech-heads (IT Pro among them) scouring newsagents in the vain hope of finding a copy. The MagPi told IT Pro that it is increasing its print run with each issue and hopes to avoid a similar situation, but noted that this issue is expected to be popular.

Russell Barnes, head of publishing at Raspberry Pi, said: "AIY Projects represents a hugely exciting move from Google into the world of digital making, and we're over the moon to offer this revolutionary kit free with the print edition of the official Raspberry Pi magazine.

"Google's Voice HAT brings with it a whole new world of possibilities for digital makers. The ability to easily integrate natural voice interaction into your Raspberry Pi projects is going to have a huge impact and we can't wait to see what our readers do with their AIY Projects kits."