Intel's 18-core Core i9 processor will hit shelves in September 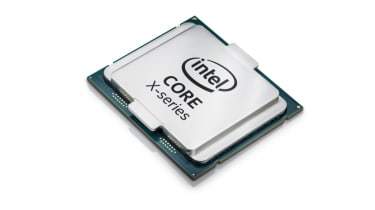 The Core i9-7980XE processor will head up Intel's new line of CPUs which were announced back at Computex 2017, aimed at both professional and home users after large amounts of computing power.

Sporting a base CPU clock speed of 2.6Ghz with the potential to boost up to 4.2GHz courtesy of Intel's TurboBoost 2.0 technology, the 32-thread equipped processor is aimed at handling very demanding tasks, such as processor intensive 4K content creation and running graphics-hungry virtual reality applications.

The top tier chip will be joined by slower Core i9 CPUs which come with fewer cores and less compute horsepower, but are a little easier on the wallet.

Given the positive reception AMD's rival Ryzen family processors have received, the Core i9 series will look to in back Intel some of the attention it may has lost to its rival.

Intel has announced a sweeping series of updates to its desktop processor lineup, including new Core X-series processors, a Core i9 family and an 18-core desktop chip.

The biggest news is the launch of the company's new X-series chips. Essentially a rebranded version of the company's Broadwell-E line of 'extreme' processors, the newly-announced X-series sits at the very top of Intel's desktop enthusiast range, designed for customers who want the absolute best performance.

Intel boasted of high scalability within the new family, with options ranging from four cores all the way up to a huge 18 cores at the top end. Four, six, eight and 10-core chips will be available initially, with 12, 14, 16, and 18-core options to be added at a later date.

Performance-enhancing additions in the new chips include up to 10% better multithread performance and 15% better single-thread performance over the previous generation of chips, Intel said. This is thanks to support for a new and improved version of the company's TurboBoost 3.0 technology in certain SKUs, as well as improvements to its caching.

The new chips also boast up to 44 PCIe lanes for lightning fast connections between components like SSDs and graphics cards. Intel's Optane memory is also supported, thanks to the fact that all of the X-series processors use the company's new X299 chipset.

Another eye-catching announcement was the unveiling of a whole new subset of Intel processors - the Core i9 family. Occupying the very top spot in Intel's consumer portfolio, this beast of a chip tops out at 18 cores and 32 threads, with Teraflop performance and a $2,000 pricetag.

"The possibilities with this type of performance are endless," wrote Intel's client computing vice president Gregory Bryant in a blog post. "Content creators can have fast image rendering, video encoding, audio production and real-time preview - all running in parallel seamlessly so they spend less time waiting and more time creating."

"Gamers can play their favorite game, while they also stream, record and encode their gameplay, and share on social media - all while surrounded by multiple screens for a 12K experience with up to four discrete graphics cards."