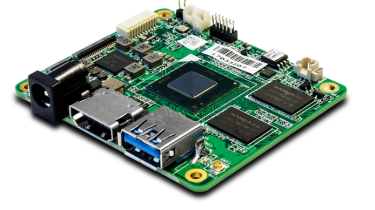 The UP Core, a rival to the Raspberry Pi micro computer, will start shipping to Kickstarter backers in August, the company behind the innovation has revealed.

The 69 (60) computer can run Windows, Android or Ubuntu, making it much more flexible than the open source computer, although it's more than double the price compared to the $35 Pi 3 Model B.

The UP Core does have an extremely top-end spec for such a tiny computer though, including an Intel Atom x5-Z8350 CPU with a 2MB Cache, up to 1.84 GHz, Intel HD 400 Graphics and either 2GB or 4GB RAM. It will be available in either the 16GB, 32GB, or 64GB versions, utilising eMMC as its preferred storage option.

With one HDMI port, one full eDP, Audi via HDMI and Docking's i2S, it supports a decent range of video and audio formats, while a USB 3.0 host and two USB 2.0 pin headers ensure you can plug in enough peripheries for a keyboard, mouse and a camera, for example.

Also packed inside include Wi-Fi 802.11 b/g/n to connect to the internet and Bluetooth 4.0 (BLE) for other wireless networking needs.

UP Core's makers claim it has attracted a selection of launch developers who are busy creating third party hardware and software for those who have bought a microcomputer. Although it won't have the same support as Raspberry Pi at launch - mostly because the open source microcomputer has more than five years on the UP Core, it's a positive step towards making microcomputers more accessible to a wider group of people.

So far, UP has managed to treble its Kickstarter goal of 10,000 (8,750), with almost a month still to run on its campaign. Those who opt to support the company can pick up a UP Core for the discounted price of 69 for the 1GB RAM/16GB eMMC version.