The chips are available worldwide from $109 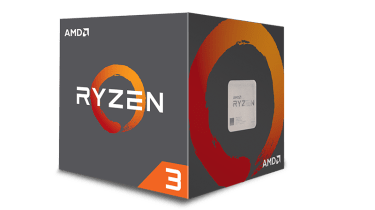 The company's new processors are available in two flavours - the Ryzen 3 1200 and Ryzen 3 1300X - which are clocked at 3.1GHz and 3.5GHz respectively, with both offering four single-threaded cores. The chips are roughly comparable to Intel's Core i5-7400 and Core i5-7600, which have similar core counts and clock speeds.

However, what does make a big difference is the price. The Ryzen 3 1300X comes in at $129 (100), while the lower-specced Ryzen 1200 will cost $109 (85). That's roughly half the price of the equivalent Intel processors - although UK pricing has yet to be announced, and it's likely the prices will be slightly higher in sterling, as is usually the case.

Both chips support AMD's AM4 platform, just like their bigger brothers, the Ryzen 5 and Ryzen 7 processors, plus they can take full advantage of overclocking because, just like the other chips in the range, they ship with their multipliers unlocked. Another bonus is that they utilise AI to work out the best way to distribute workloads according to your usage to make use of the power more efficiently.

"These past few months have been an exciting period for AMD with the global launch of Ryzen 7, designed for even the most demanding power users, and the release of Ryzen 5, which meets and even exceeds the needs of serious Prosumers," said Jim Anderson, senior vice president and general manager, Computing and Graphics Group, AMD.

"Ryzen 3 is a significant addition to our Ryzen desktop processor lineup, scaling industry-leading responsiveness and performance into a budget-friendly package for mainstream users. AMD's Ryzen processor line reenergises innovation and competition across the entire PC market, providing consumers with a newfound selection of processors that can fulfill their computing needs at virtually every price point."