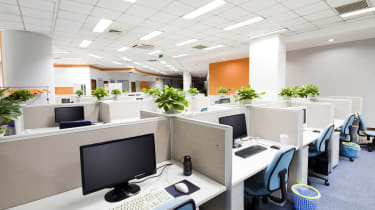 Businesses still say they favour traditional PCs over mobile devices, though sales figures may suggest the opposite to be true.

This is according to research conducted by Spiceworks, which questioned just under 1,000 IT professionals in the US, UK and Canada from a range of business sizes and sectors.

Some 60% of employees rely on desktops in the workplace, with 27% being reliant on laptops. Mobile devices such as tablets, smartphones and 2-in-1s are not commonly used, with the results placing them at three percent, two percent and two percent respectively.

Just under a quarter (24%) of organisations plan to increase PC investment in the next year, although 17% are planning to cut back on spending in this area.

"In contrast, laptops are expected to see the most growth among end user devices in the workplace. According to Spiceworks survey data, 43 percent of organisations plan to increase their investments in laptops over the next year," said Peter Tsai, senior technology analyst at Spiceworks.

Some 25% of organisations are also expected to increase their spend on tablets, while spending on smartphones and 2-in-1s are expected to see a nearly 20% increase.

In the next 12 months, one quarter of companies said they were planning to buy Dell PCs. 17% said they would buy HP Inc machines, while 13% plan to buy Lenovo kit. Some 15% also said that they plan to increase their spending on Microsoft PCs and 8% said they would do the same on Apple laptops and desktops.

Furthermore, Dell was found to be the most commonly used PC brand, with 47% of laptops and desktops coming from the company. HP scored 21%, Lenovo 14% and Apple 4%. According to the survey results, Microsoft-branded PCs are used by 3% of survey respondents, whereas the Acer and Asus brands are both used 1% respectively.

In UK organisations, the gap between Dell and its competition is slightly smaller. Tsai said: "...24 percent of PCs are from HP Inc. and 14 percent fall into the "other" category, indicating more diverse PC brand usage than in North America."

The respondents were also asked which one attribute they most closely associate with each PC manufacturer. Dell, HP Inc and Lenovo received the highest scores for reliability with 34%, 28% and 23% respectively.

More than (53%) of IT professionals don't expect mobile devices to replace PCs in the near future though. Those who believe it could happen, say a mobile-dominated workplace is at least three to five years away.

Tsai added: "Contrary to the popular narrative about the 'death of the PC' IT professionals told us resoundingly that in the professional world, traditional laptops and desktops will continue to be the device of choice for years to come.

"While it's true desktop PCs will likely become less prevalent in the future, perhaps giving way to laptops, usability challenges when it comes to key business tasks will prevent tablets and smartphones from taking over in the workplace."

Despite this, in February HP Inc recorded the best PC sales growth since XP refresh. This helped the company to hit $12.7 billion in revenue in its first quarter of 2017.