Lost the remote? Use your cat 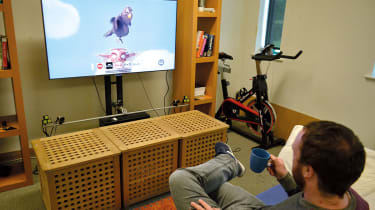 Forget digging around in couch cushions for the missing remote British researchers have developed a solution that uses gesture recognition to turn everything into a controller, from your hand to your cup of tea, or even your pet cat.

Researchers at the University of Lancaster have unveiled "Matchpoint", saying the gesture system lets devices be controlled via movement of the body or objects using only a webcam. Different targets are shown on the screen corresponding to a menu, volume or channel, for example with the user moving the object or their hand to turn up the sound or switch channels.

Called "spontaneous spatial coupling," the gesture control system doesn't need to be trained using a specific object, it simply looks for anything rotating or moving in the correct way.

"Spontaneous spatial coupling is a new approach to gesture control that works by matching movement instead of asking the computer to recognise a specific object," said Christopher Clarke, PhD student at Lancaster and author of the paper on the technology, which is set to be unveiled at a conference later this month.

When engaged, the system shows sliders on the screen; to control them, the user moves their hand, object or head in the right direction.

That means you can turn up the volume of a YouTube tutorial without downing tools, for example. The gesture control system also works with multiple users, handy for interactive whiteboards in a meeting, and supports using two hands to zoom in and rotate images.

"Our method allows for a much more user-friendly experience where you can change channels without having to put down your drink, or change your position, whether that is relaxing on the sofa or standing in the kitchen following a recipe," Clarke said.

While meeting attendees or Netflix watchers can easily "de-couple" their hands so they cease acting as controllers, the system also lets users link an object to controls to be used as a remote for a longer time period. That means your favourite mug could be used to change a music track when moved to a new position, the researchers said, or a toy car be used to adjust volume, though the objects lose their remote control powers when out of the camera's field of view.

"Everyday objects in the house can now easily become remote controls so there are no more frantic searches for remote controls when your favourite programme is about to start on another channel, and now everyone in the room has the remote'," said Clarke. "You could even change the channel with your pet cat." That said, it may well be easier to dig the remote out of the back of the couch than convince your feline friend to change the channel for you.

Gesture controls have met with limited success in computers and VR, with Leap Motion embedded in some HP laptops for a brief time. The researchers admit the technology is an academic prototype, so don't expect it to arrive with your next TV anytime soon.