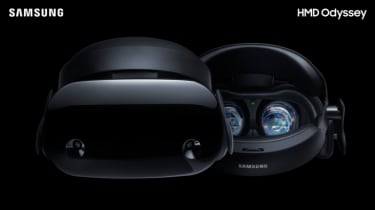 A new VR headset is coming to Windows 10, courtesy of Samsung.

The company, which already has a line of virtual reality hardware in the form of the Gear VR, is branching out into mixed-reality with this new device, named HMD Odyssey.

Samsung's announcement was made at a Microsoft event in San Francisco, where the release date for another four headsets, made by Dell, Acer, HP and Lenovo, were also announced.

The HMD Odyssey has been designed specifically for use with Windows 10's mixed-reality platform and boasts some impressive specs, including 2880 x 1600 resolution OLED display, up to 110 field of view, and a refresh rate of up to 90Hz.

Commenting on the announcement, Alanna Cotton, VP and GM of Samsung Electronics America, said: "When we began designing and engineering the Samsung HMD Odyssey with Microsoft, there was only one goal in mind, create a high performing headset that's easy to set up and can transport people to the incredible world of virtual reality.

"Samsung is committed to working across platforms to build cutting-edge technology, and we're excited to partner with Microsoft to shape the future of virtual reality. But most of all, we can't wait for you to take the Samsung HMD Odyssey out for a spin, and see it for yourself."

The Acer, Dell, HP and Lenovo headsets are available to preorder today and will all go on sale on 17 October the same day the Windows 10 Fall Creators Update is released.

The HMD Odyssey is also available to preorder immediately, but won't be on sale until 6 November.