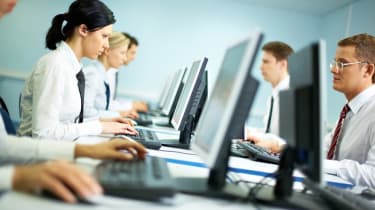 PC sales are set to drop 4.9 per cent this year, after analyst house IDC adjusted its predictions in light of new dark omens.

That puts PC sales numbers at 293 million, after IDC had predicted sales to drop 3.3 per cent, still representing a large figure for the declining industry.

However, IDC's adjustment comes after chipmaker Intel said its first quarter revenue for 2015 would be nearly $1 billion less than originally estimated.

Meanwhile Intel said its own poorer than expected performance was down to slow migration away from computers running Microsoft's expired Windows XP operating system, use of which grew at a faster pace than Windows 7 usage last month.

However, there was some light at the end of the tunnel for PC makers with eMarketer's prediction that tablet growth will slow as people don't switch devices as often as they do phones.

Bill Fisher, analyst at eMarketer, said: "The country's tablet market is reaching a point in its maturity curve that signals a slowdown in user growth. Such a slowdown in the rate of penetration suggests that most of those who want a tablet likely already have one, with more sales than ever likely to be replacements."

This will continue declining until the end of the forecast period, dropping to 3.8 per cent by 2019.