This tiny PC is a stick to beat yourself with, not a carrot 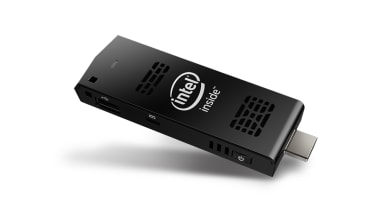 As PC components get smaller and more efficient, PCs themselves are shrinking too. The Raspberry Pi showed just how small an affordable consumer micro PC could be, and now Intel's Compute Stick is aiming to demonstrate that you don't have to sacrifice power in the process.

The Compute Stick is, in part, a showcase for how small a PC Intel can squeeze its hardware into. Not much bigger than a USB stick, the Intel Compute Stick has an Atom Z3735F 1.33GHz quad core processor and 2GB of memory at its heart.

As one of Intel's cheapest mobile processors, it's no surprise that it struggled greatly with our benchmarks. It can cope with some tasks, but you have to manage your expectations.

If you're planning to juggle multiple strenuous tasks, then the Compute Stick's meagre memory and lowly processor means this is not the PC for you. 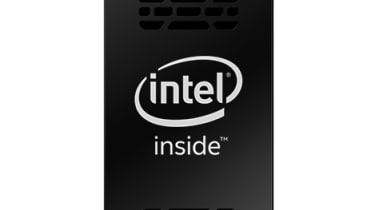 Very basic operations worked reasonably well. HD video played back fine and we could edit documents with the latest version of Microsoft Office but only as long as we didn't try to do both at the same time.

Just as notable, the Compute Stick heated up considerably during any sort of use. Despite the built-in miniature fan, it's clear that the components were working overtime even when handling only basic tasks betraying both the underpowered components and the difficulties of cooling them in such a small package.

The Compute Stick comes with Windows 8.1 pre-installed and can be upgraded to Windows 10 for free.

It's also available with Ubuntu 14.04 LTS pre-installed for 18 less. Unfortunately, this variant of the Computer Stick is even less powerful than the Windows version, with half the amount of RAM and only 8GB of storage.

You'd have to really value convenience to choose this option Ubuntu is a freely available, open source OS. Rather than accept a hardware downgrade, anyone that wants Ubuntu on their Compute Stick can just download and install the OS themselves.

Labelled as a micro PC, the Compute Stick's main advantage is its size. Not much bigger than a USB stick, it's endearingly petite measuring just 103mm long and 38mm across. 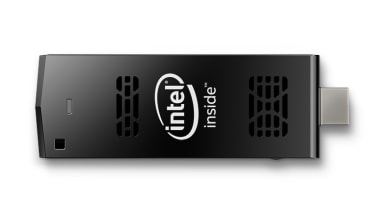 Its pint-sized dimensions make it appealing for slipping into a bag or even a pocket for use as an alternative to a laptop. The HDMI output means you can you can easily connect it to most existing TVs and monitors, but here the Compute Stick may still be too big.

When using the built-in HDMI connector you'll need at least 5-6 inches of clearance between your monitor's port and the nearest surface to comfortably accommodate the stick's length. You can always carry a HDMI extension lead, but this isn't as convenient as adapters are prone to being lost or forgotten.

As expected for a cheap, tiny PC the Compute Stick uses 32GB of eMMC flash storage. The slowness of eMMC may partially explain the Compute Stick's poor performance. Unless you don't need much storage, or rely on cloud storage, you'll need to add more local storage using the MicroSD card slot.

In terms of additional connectivity, there's not much. There's a single USB2 port, Bluetooth 4.0 and 802.11 b/g/n WiFi. Disappointingly the latter is 2.4GHz only.

The built-in Intel HD audio is supposed to provide "a high quality, multichannel sound experience, without an audio card". However, as the Compute Stick has no audio output besides the single USB port, it's unlikely you'll get the benefits of this especially if you're reliant on wireless speakers or a monitor with integrated speakers. 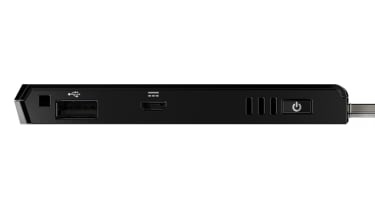 Bluetooth devices admittedly work well. When tested with a Logitech K360 keyboard and Logitech MX Master mouse, we noticed none of the wireless lag that marred previous stick-sized computers such as the Hanspree Micro PC.

The Intel Compute Stick may be cheap at 100, but this doesn't equate to value. In many ways, Intel's microPC feels like a poor compromise between two extremes.

On the one hand, for small form-factor computing, the Raspberry Pi 2 is roughly the same size and has comparable performance (with admittedly lighter weight operating systems) for a fraction of the cost. The Pi, designed more for electronics projects than general purpose computing, does admittedly need more effort to get up and running.

Even though the Compute Stick is best suited for very lightweight tasks, dearer but still inexpensive tablets that can achieve the same tasks, but are less frustrating to use, will be a better option.

The Compute Stick feels like a tech demo. It is admittedly impressive that Intel has managed to cram a Windows PC into something the approximate size of a chocolate bar, but unfortunately, that's pretty much all it has going for it. It's aiming for power and portability, but really accomplishing neither.

As an actual business device, it's limited to niche usage scenarios such as digital signage or light-use public terminals in common areas. In addition, Intel has already announced plans for a Skylake-based Compute Stick to succeed this Atom-based model, leaving even less reason to buy this underpowered oddity.

The Intel Compute Stick works well as a demonstration of just how small a PC can be, but it's only half a computer and not the good half either