The pocket-sized Chrome PC that's trying to big itself up 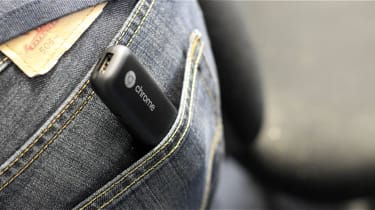 It's easy to see the appeal of stick-sized computers, such as the Intel Compute Stick. They're very cheap and very small usually around the size and shape of a big highlighter pen. Unfortunately, the Windows stick PCs we've seen to date have been next to useless due to their horrifically slow performance.

Asus has taken a different tack with the Chromebit. As its name suggests, this stick PC runs Chrome OS instead of Windows the first we've seen to do so. It's just as compact as its Windows counterparts, as our photo shows, if not more so.

This size does impose the same physical limitations that affect many Windows-powered sticks. There's just one full-size USB port and a power connector, and that's your lot. Bluetooth 4 is also included, so you can use a Bluetooth keyboard and mouse to make the most of the lone USB port. Even then, it's likely you'll need a USB hub to connect other USB peripherals to the Chromebit. It all starts to get a bit unwieldy when you add on a USB hub, partially negating the portability advantage of the Chromebit's size. 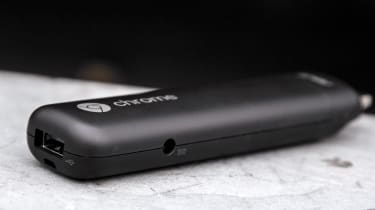 The Chromebit is powered by an ARM-based Rockchip RK3288C processor. It's a quad-core chip that runs at up to 1.8GHz and is paired with 2GB of RAM. It's not a powerhouse by any stretch of the imagination, but, as is so often the case with Chrome OS, things aren't nearly as bad as they could be. Google Docs ran smoothly and we never had any issues working on multiple documents and switching between windows.

Things were a little slower with some of our rather large Google Sheets spreadsheets, and copying and pasting between them was surprisingly sluggish. We did manage to get things done, just a little slower than usual.

Multimedia- and ad-heavy web pages tended to lag and stutter when scrolling, and loading times were noticeably slow too. We were more impressed with the performance of Polarr, the free photo editing web app. Manipulating 20MP images, the sort of resolution you can expect to find from many CSCs and some high-end smartphones, was quick and easy as the GPGPU-accelerated webapp took advantage of the 600MHz ARM Mali-T760 graphics chip. We also attempted to play a few web-based Flash games, but those website's penchant for huge ads meant most games were unplayably laggy.

The GPU capably handled 1080p video without a hitch, which makes the Chromebit a viable media streamer if you also want to plug it into the back of a TV. If you plug it into a device capable of a resolution greater than 1,920x1,080 pixels, your desktop will be stretched because the Chromebit's integrated HDMI connector only has a maximum supported resolution of Full HD. 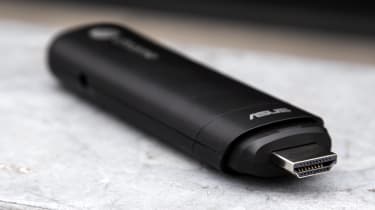 The Chromebit only comes with 16GB of on-board storage and there's no MicroSD slot to expand this further. With Chrome OS installed, there's just under 10GB of free space. However, since Chrome OS is heavily focused on using the cloud for data storage, pulling stuff down to your device as and when you need it, this shouldn't be a huge problem. You can, of course, use USB storage if you really need a local-based alternative.

This cloud-centric form of computing does of course depend on a reliably fast internet connection, even if you use webapps that support offline operation. This is less of a critical failure point for a desktop PC as opposed to a Chromebook laptop which is more likely to encounter slow or unreliable WiFi connections. Still, it's something to bear in mind if you'll regularly be toting the Chromebit around as a poor man's laptop substitute especially given the lack of built-in Ethernet as a fall-back option. 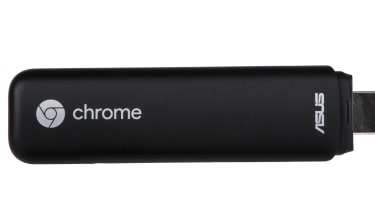 On the face of it, the Asus Chromebit is a good-value device but it's not quite as cheap as we would have expected for such a low-powered device that isn't lumbered with an expensive Windows licence.

The Chromebit makes sense for light-use hot-desking, modest thin-client use and other comparatively niche use cases such as digital signage and public access terminals in spaces such as lobbies and libraries. It's far less compelling as a PC replacement for even moderately demanding users.

If you're really enamoured with the idea of a stick PC, then it's worth waiting for Intel's revamped Windows 10-based Compute Sticks built around Atom x5 or Skylake-class Core M processors which should perform better than the first Compute Stick.

Cheap, cheerful and compact, but this stick PC is really best suited for a certain range of limited use scenarios rather than as a wholesale replacement for a fully-fledged and more traditional PC