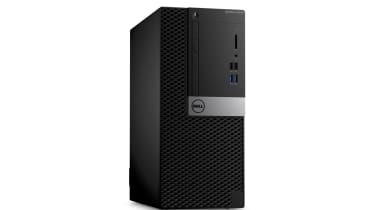 Dell's office desktop PCs are some of the most versatile in the business, and that's no different with the Optiplex 5040. This machine is small yet easily upgradeable and the wider Optiplex 5040 line is stacked with different configurations and form factors.

This is a small, squat machine that's big on versatility. A blue plastic tab on the back of the system pushes down to let the side panel ease free, while three tabs on the front section allow that slab of plastic to pop away from the Optiplex's metal skeleton. 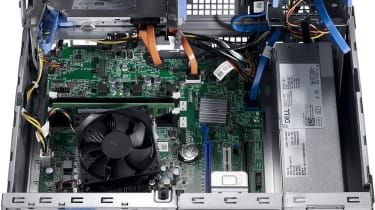 There are more blue tabs on the inside. One allows the sturdy storage cage to peel away from the motherboard until it sits almost perpendicular to the board. That position means the internals are laid bare: the hard disk sits in a bay that's covered with the now familiar blue plastic, and the slimline optical drive is just as accessible. The bottom of the case has two spare 2.5in bays with power cables ready to attach to SSDs or laptop hard drives.

There are three memory slots that can take twelve extra gigabytes of DDR3. There are two SATA ports free, one PCI-Express x1 and one x4 slot a piece as well as single PCI-Express x16 and PCI slots.

All of that means there's plenty of room to add more memory, storage and numerous expansion cards and Dell has cleverly made sure the storage cage makes way so large graphics cards can be added without clashing with metal elsewhere. 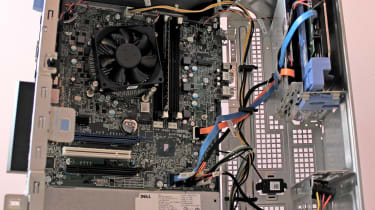 It's a good start for this sturdy system, and its dimensions mean it won't take up much room: it's just 154mm wide and 350mm tall. That's far smaller than the average desktop tower, and it's not far away from the HP Z240 SFF that machine was 100mm wide and 338mm tall, and packed in similar versatility. It's a testament to Dell's design work that this 469 Optiplex isn't far removed from the far pricier HP when it comes to expansion and ease in accessing the inteiror.

The front of the Optiplex has pairs of USB2 and USB3 ports alongside an audio jack and a card reader, while the rear has four more USB 3 ports, a pair of PS/2 connectors, an HDMI output and two DisplayPort sockets. 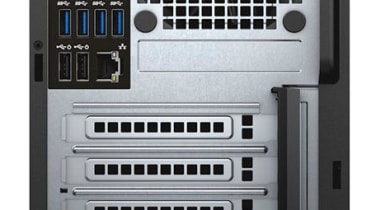 Dell has installed some useful software on this PC, too. Windows 10 is the default OS, although you can downgrade to Windows 7. Dell's Client Command Suite allows for automated system and BIOS changes across a whole fleet of PCs, while ControlVault is used to isolate passwords and encrypt data. And then there's the BIOS itself, which has dozens of options for tweaking system configurations, security, boot behaviour and more.

This 469 ex VAT PC has a suitably mid-range specification that revolves around Intel's Core i5-6500 vPro-enabled processor. It's a quad-core Skylake chip with four 3.2GHz cores and a peak Turbo Boost clock speed of 3.6GHz paired with an Intel HD Graphics 530 integrated graphics chips that has a 1,050MHz top speed and 192 stream processors.

The 6500 processor is more than fast enough that it won't balk at standard office applications like Word and Excel, and it'll handle trickier tasks too complex databases and photo editing, for example, will work well. 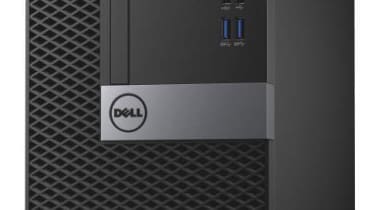 This is a 469 PC, though, so there are some limitations. Its multi-tasking abilities will be hindered by the lack of Hyper-Threading and the modest 4GB amount of included memory, plus the Core i5 chip doesn't support ECC memory. It's got a smaller cache than the Xeon chip inside the HP Z240SFF, too.

All this means that high-end photo, video and CAD tools won't run especially smoothly. This is a mid-range general purpose office system rather than a powerful workstation.

The Core i5 silicon is accompanied by 4GB of DDR3 memory and a 500GB hard disk. They're just about acceptable for a basic work machine, but don't expect lightning speed the hard disk meandered through sequential read and write benchmarks at speeds of 128MB/s and 110MB/s.

Dell sells loads of service options. The basic three-year next-business-day warranty can be upgraded to a ProSupport deal for an extra 61, and four- and five-year options cost 98 and 134 respectively. One or three years of data protection cost just 4 and 8, and asset tagging is similarly inexpensive.

Dell also makes numerous different specifications available at a wide variety of prices. The most affordable model costs 399 and has a Core i3 processor, while the next version above our review sample is a 499 machine that doubles the memory to 8GB.

Pricier machines add higher-end components. Dell's 529 version maintains the Core i5 CPU and 8GB of memory but swaps the hard disk for a 128GB SSD, while the 659 model drops back to a hard disk but swaps the Core i5 chip for a faster Core i7 processor that has Hyper-Threading on-board.

It's also possible to buy the Optiplex 5040 in a small-form-factor design that's just 290mm tall and 92mm wide, although that system obviously loses out on upgrade room.

HP's more expensive Z240 SFF has a wider choice of component and service upgrades, but that's no surprise the Z240 SFF is a pricier, hard-nosed workstation designed for more strenuous tasks.

Dell's latest Optiplex is an affordable office desktop PC that does plenty right. It's small and packs in ample versatility, and it's got a good slate of features and software only far pricier workstations will offer more in this department.

The modest specification restricts the Dell to mainstream work tasks, but that's no bad thing since that is the market it's aimed at. It'll rattle through Microsoft Office, web browsers and photo editing tools without complaint, and numerous other specifications are available for more grunt.

It won't break speed records, then, but this is a good all-rounder PC that'll prove a worthwhile and versatile addition to the workplace.

It has a neatly expandable design, but this small, smart PC doesn’t have the power to go beyond mid-range office applications