Microsoft Surface Studio review: An extraordinary all-in-one PC with a price to match

A fantastic, enormous all-in-one that's much more than an iMac wannabe 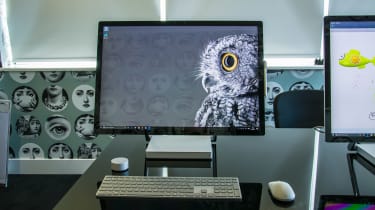 As we've mentioned, the Surface Studio's party trick is its ability to fold down into a lectern-style drawing board, angled at a comfortable 20 degrees from your desk, intended for use with the bundled Surface Pen. To switch into this mode, you simply grab the lower edge of the screen and pull; the screen smoothly swivels forward without your having to move the base. The only slight irritation - an inevitable consequence of the otherwise nifty design - is that you'll have to move the keyboard and mouse off to the side first, or they'll be knocked onto the floor.

The almost-flat approach works surprisingly well, and the shallow angle of the Surface Studio makes drawing and annotating feel impressively natural. A big part of that is the screen's faultless ability to distinguish between fingers and elbows, which means you can comfortably lean your arm across the virtual canvas while drawing plans and prodding icons.

The pen itself works well too: it recognises 1,024 pressure levels, so you can distinguish between tentative sketches and bold underlinings, with a clickable button on top for quick access to Sticky Notes, Sketchpad and other relevant apps. The glass coating on the Surface Studio's display is thin enough to feel, more or less, like drawing directly onto the screen. And things are helped along by the little target that appears when you hover the pen over the screen, so you can make sure your lines start and end in exactly the right place. 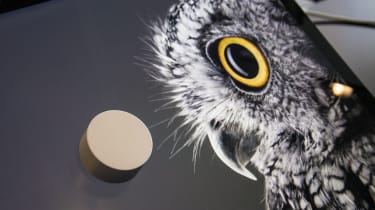 To complement the Surface Pen, Microsoft also offers a novel little hockey-puck-shaped controller called the Surface Dial. The idea is that you place this on the Surface Studio's reclined screen, using whichever hand you're not using for the pen; press it down and you'll feel a little haptic buzz, and then a radial context menu will appear. Spin the Dial to cycle through the available options, and give the unit another click to select.

It's a neat idea, and it makes working with a stylus much more viable. It's certainly less fiddly than trying to use the pen to navigate the standard mouse-driven Windows interface. There are two catches, however. First, while the Dial can be used to scroll or zoom in most apps, anything cleverer relies on developer support. Currently it works in a decent range of applications from Microsoft, Adobe and others, and you get some choice of which functions appear on the radial menu. Overall, though, its flexibility is limited, and it remains to be seen what sort of future it has.

The second is that it isn't included with the Surface Studio, but is sold as a 90 extra. As with the Surface Studio itself, it's very hard to justify the cost unless you fall squarely into the niche it's aimed at. Frankly, when you consider how much the Studio costs, and how the Dial unlocks the full potential of its headline feature, it really ought to come in the box.

This mode won't be useful for everyone. For architects and artists, it's a brilliant feature that other all-in-ones can't match. The rest of us will likely be more productive with a keyboard and mouse, and even if you are addicted to OneNote, and to funky Windows 10 features such as annotating web pages, you probably won't want to bother to fold the screen down just for that.

You may be tempted to dismiss the Surface Studio as an uninspired me-too device, but it's actually much more than an iMac knock-off for people who need to use Windows. With its colour-accurate 3:2 True Scale display, Surface Pen and neat fold-down design, it's a very credible alternative - indeed, a superior computer for some roles.

For all that, it's not perfect. Constant fan noise, laptop-grade graphics, mechanical storage and inconveniently located ports all count against it. And while those issues might not be deal-breakers, they're hard to forgive when you remember just how extraordinarily expensive the Surface Studio is. Even the cheapest model - with a Core i5 processor, 8GB of RAM and 1TB of storage - comes in at three grand, while the 27in 5K iMac range starts at just 1,749. 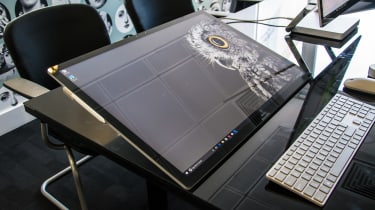 Ultimately, then, the Surface Studio comes down to a question of value. If your business is willing to pay an exceptional price for an exceptional computer then we're inclined to say that the Surface Studio outclasses the iMac - especially for artists, graphic designers and the like. But for typical home-office duties, it's not that much better than Apple's offering - and certainly not amazing enough to justify paying twice as much.

The Surface Studio's huge high-res screen makes it perfect for artists and graphic designers, but a steep pricetag means it's firmly for professionals only