Apple's not giving up on the desktop 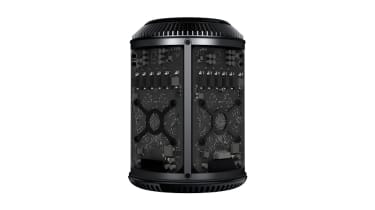 Tim Cook has promised his employees that Apple hasn't given up on the desktop.

The Apple CEO has defended the slower update cycle for desktop versions of the Mac, after the company failed to refresh its desktop lineup this year. The iMac was updated a year ago, while the Mac Mini and Mac Pro haven't been refreshed for more than two years.

That's led to some speculation that the iMac and Mac Pro desktops were on the way out in order to focus on portable successes such as the iPad.

Such chatter must have been kicking off around the water coolers in Cupertino, as Cook was spurred to respond on a message board for employees.

"Some folks in the media have raised the question about whether we're committed to desktops," Cook wrote on the in-house message board, according to a TechCrunch report. "If there's any doubt about that with our teams, let me be very clear: we have great desktops in our roadmap. Nobody should worry about that."

He goes on to stress that desktops remain "really important" to users. "The desktop is very strategic for us," he said. "It's unique compared to the notebook because you can pack a lot more performance in a desktop the largest screens, the most memory and storage, a greater variety of I/O, and fastest performance. So there are many different reasons why desktops are really important, and in some cases critical, to people."

Cook also added Apple has a clear idea of what's coming next in the market, but realises there's value in exploring new ideas to see where they go - praising Apple employees for being willing to take that journey.

"The fantastic thing about Apple employees is they get excited about something, and they want to know how it works. What it will do. What its capabilities are," he wrote. "If they want to know about something in an entirely different industry, they start pulling the string and see where it takes them. They're focused more on the journey, which enables so many great things to happen."

He added: "We've got a ton of things on our roadmap that I can't talk about, but that I'm incredibly excited about, that are the result of pulling that string and not being bound by the box that so many people in life get bound by."

Cook said governments are key to a host of policies that are important - and not only to Apple, such as human rights, climate change and education.

"There's a large number of those issues, and the way that you advance them is to engage," he said, according to a Guardian report. "Personally, I've never found being on the sideline a successful place to be. The way that you influence these issues is to be in the arena. So whether it's in this country, or the European Union, or in China or South America, we engage. And we engage when we agree and we engage when we disagree. I think it's very important to do that because you don't change things by just yelling. You change things by showing everyone why your way is the best."

But he added: "We very much stand up for what we believe in. We think that's a key part of what Apple is about. And we'll continue to do so."