Microsoft shifts its focus on tools and devices for creative professionals 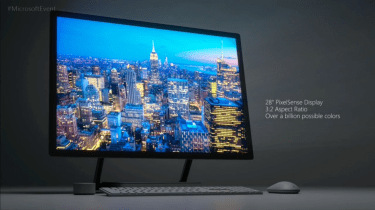 The word "creativity" was a definite constant at yesterday's Microsoft launch event, repeated by pretty much every speaker.

In his opening speech, executive VP, Terry Myerson said: "What unites all of us is that we're creators of our individual lives".

Microsoft said it wishes to develop technological tools that can be used by professionals in different fields to turn their ideas into a final product using new creative possibilities.

This notion is at the core of many new products presented yesterday, including the Windows 10 Creators update, Xbox features and the new Surface Studio desktop PC.

Windows 10 Update, has 'creativity' within its very name. Some of the features of Windows 10 Creators Update include 3D tools, new communication widgets, integration with HoloLens and new Xbox Live features.

The update will include a 3D feature for PowerPoint, which it's hoped will help users create more engaging presentations - no more death by slidedeck.

Microsoft also announced a partnership with positioning product maker Trimble to bring creations made in its SketchUp software into the 3D Paint community.

At the event, Windows Experience Group's general manager, Megan Saunders, showcased some of Windows 10's new 3D tools, including Paint 3D. This feature allows users to capture objects in 3D using their phone's camera, a feature that should be available for Windows 10 Mobile soon, and iOS and Android in the future. Users can also create emojis or 3D drawings from scratch and print these using a 3D printer.

Saunders said: "We need to make 3D creation as simple as taking a picture on your phone".

The update also allows customers to use their computers with VR headsets or HoloLens' augmented reality and brings new features for Xbox and Windows PC gamers, allowing more cross-platform interaction, further game broadcasting tools and the possibility to create their own tournaments.

In addition the new SurfaceBook i7, said to have "twice the graphics", better performance and up to 16 hours of battery life, Microsoft announced a new desktop computer called Surface Studio.

Surface Studio is, once again, centred on creativity, with an Intel Core i7 processor, nVidia GTX 980m GPU, 23GB of memory, 2GB hard-drive and 28in touchscreen display that pushes over 13 million pixels. The display uses a technology called TrueColor, said to enhance the depth of colour. It can also be folded down and used as a graphics tablet.

At first glance, this would appear to be the perfect tool for graphics designers and other creative professionals, and can be used in combination with the Surface Pen to produce high quality digital designs.

Panos Panay, corporate VP of devices at Microsoft presented the product saying: "Every one of us is a creator; we want to use this product to help all of us create."

Richard Edwards, principal research analyst at Ovum, questioned whether the Surface Studio would help pick up falling PC sales, saying: "It's clear whom Microsoft is wooing with this device: the creative pro. With the Surface Pen and the newly introduced Surface Dial (a radial haptic input device), Microsoft is clearly increasing the versatility of an already capable genre, but is it enough to relight the fire under the corporate PC market?"

At the end of the event, Microsoft CEO Satya Nadella summed perfectly what Microsoft's ethos is at the moment.

Nadella said: "I believe that the next ten years will be defined by technology that empowers profound creation."

"Every choice we (Microsoft) make is about finding that balance between consumption and creative expression," Nadella added.