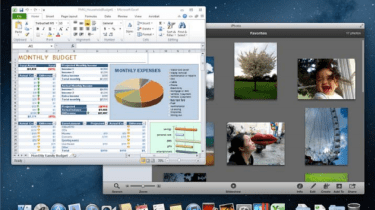 Parallels Desktop is an invaluable tool for those who use a Mac at work, but who need to run legacy apps accessible only via Windows.

Desktop 9 is the latest annual refresh packing support for Windows 8.1 and Mac OS X Mavericks as well as performance tweaks. It's the best version of the software to-date, but few headline-grabbing features mean existing users don't need to rush out and update.

This advantage also applies to Chrome OS and Linux, which are supported by Parallels Desktop.

Installing and uninstalling the Windows 8.1 Preview on a PC is a tedious affair. The process is quicker using Parallels Desktop to install it as a virtual machine. 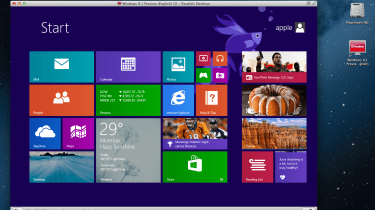 Apple hasn't added touch-screens to Macs, so you won't be tapping away on the Start screen of your Windows 8.x virtual machines. It is possible to try Windows 7 Look' a feature bringing the traditional Windows 7 Start Menu back into Windows 8.x.

This allows modern' Windows 8 apps to run within a window on the desktop rather than in full-screen mode. However, these features are added to the virtual machine by using separate third-party utilities called Start8 and ModernMix, which are developed by Stardock Software. 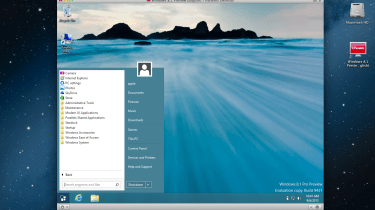 These utilities have been well-reviewed, but Parallels points out any updates or technical issues relating to this software will be handled by Stardock. This isn't ideal for large organisations which may have site licenses for the Enterprise Edition of Parallels Desktop and will expect technical support directly from Parallels.

Desktop 9 introduces a 'shared cloud' feature into the software. This allows users to sync files with cloud services such as Dropbox, SkyDrive and Google Drive.

The shared folders for these services appear within the Windows File Explorer, providing instant access to your files without needing to install Dropbox (or any other service) directly onto the virtual machine. You can even share photos from your iCloud Photostream with your VM. 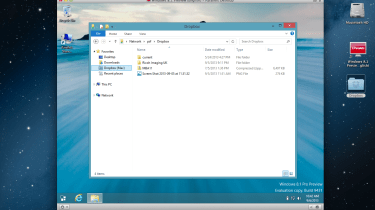 We were able to duplicate this feature in Parallels Desktop 8 on another Mac, simply by using the existing shared folder' option to connect a Windows 7 virtual machine to the Dropbox folder.

This makes cloud share a refinement and not a new feature. The same applies to the new' Security Centre window, which simply curates existing security features.

Parallels has fine-tuned performance of virtual disks and this makes startup and shutdown 25 per cent faster by our calculations - so is noticeable. 3D performance is 15 per cent faster, Parallels claims, but Desktop 9 is not at the point where you can run Windows games like Skyrim on your Mac.

Thunderbolt and Firewire external drive support has been added. You can specify a default setting which determines whether a drive connects to the Mac or to the virtual machine each time you plug it in. This was already available for USB devices. 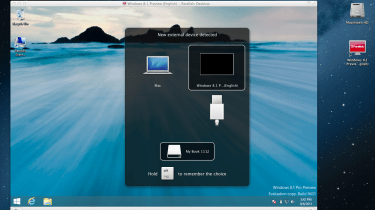 Purchasing Parallels Desktop 9 also provides you with a six-month subscription to the Parallels Access app for the iPad. This excellent remote access app allows you to control either a Mac or PC from an iPad without needing a copy of Parallels Desktop.

Parallels Access is impressive, but overpriced. The six month trial will allow you to make up your own mind. You can also try out Parallels Desktop 9, as there's a 14-day trial version available.

Overall, Parallels Desktop 9 is competitively priced at 64.95 for new users or 34.95 to upgrade. Pricing for volume licensing is available on request. If you're looking for virtualisation software then this is worth the investment, but if you're on Parallels 8 already we upgrading is not essential.

Parallels Desktop 9 is not an essential upgrade. However, it’s the most easy-to-use virtualisation tool available for the Mac, and well worth the price for anyone who needs to run Windows software on Apple products.