Fusion is one of the main rivals to Parallels Desktop, and the latest version of VMware's virtualisation software aims to attract IT admins by making deployment straightforward.

VMware's entire business is focused on providing virtualisation tools for enterprise users. There's less emphasis on the interface eye-candy of Parallels Desktop and few claims about running 3D games using Windows. Fusion is focused on the task of customising and managing virtual machines within your organisation's IT infrastructure.

A key feature of Fusion 6 Professional is the ability to clone' a virtual machine, creating identical copies of a particular configuration, which can be used as the standard virtual desktop' throughout the organisation.

It's also possible to create a linked clone', which shares its disk space with the original parent' virtual machine. This is quicker, and requires less disk space than creating a full clone of a virtual machine, and allows for quick distribution over a network. However, the need to remain linked to the parent virtual machine means the linked clones are suitable for specific, short-lived tasks, such as bug-fixing or viewing a particular file.

You can also apply a number of restrictions', to your virtual machines. It's possible to set an expiry date for a virtual machine used by a contractor and prevent them from connecting a USB storage device to the virtual machine.

Fusion's counterpart for Windows VMware Workstation supports many of these same features, so Fusion 6 Professional also includes a license for the VMware Player Plus, which allows users of Fusion for the Mac to transfer and run their virtual machines on a Windows or Linux PC.

Fusion 6 support the latest operating systems - OS X Mavericks and Windows 8.1. With the latter, the developers at VMware have missed a trick here as Fusion doesn't automatically allow you the software like Parallels - so you have to set up everything manually.

However, Fusion scores over Parallels in one other respect when working with Windows 8.x. Parallels Desktop 9 includes an option called Windows 7 Look' - this restores the traditional Start menu to the Windows Taskbar. Unfortunately, this option requires the installation of additional third-party software which isn't directly supported by Parallels. In contrast, the Fusion pull-down menu appears in the host Mac's main menu bar and can display a customisable list of Windows applications installed on your virtual machine this puts the Windows Start menu right onto the Mac desktop. 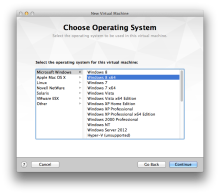 Regardless of the guest operating system, Fusion 6 now allows you to create workstation-class virtual machines by supporting up to 16 virtual CPUs, 8TB of virtual disk space and 64GB of memory.  This will be ideal for the forthcoming Mac Pros which each pack Intel's Xeon E5 processor and up to 64GB of RAM and 1TB of storage. 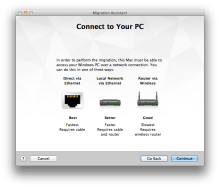 If you require greater control you can click the More Options' button, which will allow you to create virtual machines using different settings, such as memory and disk usage.

Most of these features are easy to use, but this wouldn't matter if the performance of your virtual machines wasn't up to scratch. Given a dual-core processor, enough memory and hard disk space on the host Mac, both Fusion and Parallels Desktop can genuinely run virtual machines at near-native speeds.

But if you're thinking about running 3D graphics applications such as AutoCAD - you're going to need MacBooks and iMacs.

The presentation is not as slick as Parallels Desktop, but features such as the ability to apply restrictions to individual virtual machines makes it a good option for organisations relying on virtualisation technology.