Mac gets audio file transcription capabilities, but is it any good?

Voice recognition has come to the forefront of mobile devices with the iOS (Siri), Android (Google Now) and the Windows Phone (Cortana) operating systems all having voice assistants. So how good is the latest generation of Mac software?

Nuance recommends using a machine with at least an Intel Core i3 processor and 4GB of RAM. The application is now pure 64-bit and so enables higher performance and improved memory management. In reality this means that it will happily turn speech into text without hogging system resources. This should benefit in reduced latency over previous versions and quicker editing.

Obviously, the more processing power your machine has, the smoother Dragon Dictate will run.

After installation, your first task is to train the software. This allows you to tune it up, with the expectation it will make fewer errors down the line. 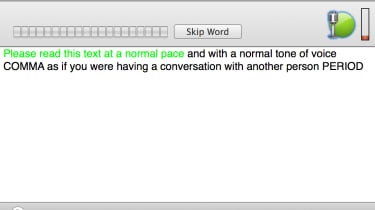 While you don't have to talk like a robot, you're still required to recite punctuation out loud and this takes getting used to. Dictation technology remains unable to assess when punctuation is needed, so you still have to complete sentences by saying "full stop" or insert pauses by saying "comma". If you don't, the dictation will be one huge chunk of text.

Has Nuance managed to solve the problem of having to manually transcribe recordings with the latest version of the software? In theory, this feature should make it easy to gleam notes from recordings of lectures, phone calls or meetings.

Before processing a file for transcription, you need to set up a profile for it. This means the application listening to 90 seconds of recording and then outputting text. You then have to accept text it got right (you listen to snippets of audio) or ignore it. It will then carry on this training period for another 60 seconds before setting off in transcribing the whole audio file.

Transcription from speech spoken through the mic provided is accurate as you can see below. 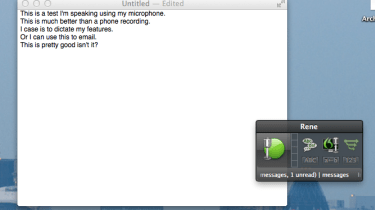 But transcriptions from recordings result in gibberish and you'll have to make so many corrections that you'd be better off doing it manually to begin with. 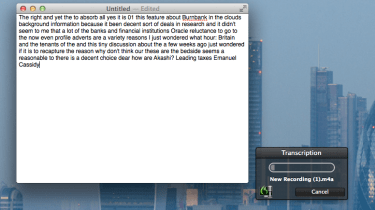 Another new feature is the ability to compose and reply to emails within Gmail using full text controls, carrying out dictation and editing natively without having to transfer text from another application. This functionality works well in Safari and Firefox, although Chrome appears to be left out of this party for now. 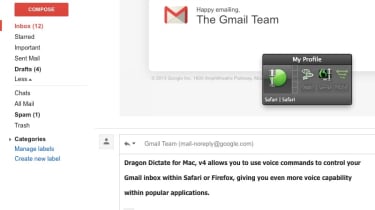 It can also enable you to control functions across applications like Finder, Mail, Messages, Notes and Safari. The application also works with Apple Pages with a number of enhancements to make dictation into that word processor easier.

When trying it out, there will be errors creeping into the text and that's because, despite the enormous strides made by such software over the past few year, it simply cannot understand context in the way humans do.

Dragon Dictate 4 is the most advanced speech recognition application available. While it may stumble over multiple voices in transcription, direct dictation through the mic is accurate.

We still believe that voice dictation is suited to short snippets of text like short emails, rather full treatises. Having to use punctuation, as well as going back and correcting text, does stifle the ability to capture your thoughts as you freely speak.

Voice transcription has a long way to go before it can rival the accuracy and consistency of the human brain, which can differentiate between voices, words, phrases and sentences.

Dragon Dictate is a solid effort most useful when you dictate directly through the microphone. The automated transcribing feature needs work through.