But even Twitter goes silent when players step up to shoot

Penalty shootouts have the ability to turn even the most confident football fans and players into uncontrollable gibbering wrecks.

So far three matches at the 2014 World Cup have required penalty kicks to decide the outcome. And of course they've had the world captivated.

The first knockout match was between Brazil vs. Chile on June 28 and it yielded the biggest talking point of the competition to date.

When Chilean player Gonzalo Jara missed his penalty, he handed the win to Brazil, and Twitter erupted with it and 388,985 TPM. This overtook the moment Marcelo scored an own-goal in the opening game of the tournament (Brazil vs Croatia) as the most tweeted moment.

Even penalties at the end of normal time have the ability to generate a big talking point, especially when the outcome of the match depends on them. When Holland's Klaas-Jan Huntelaar scored a stoppage time penalty to essentially beat Mexico there were 263,073 TPM.

Elsewhere, Tim Krul's penalty save for Holland against Costa Rica in the quarter final also generated a huge buzz - peaking at 257,860 TPM.

While we probably don't need analytics to tell us that penalty shootouts will be the most talked about moments, what is interesting is the pattern of communication. Twitter's analysis of tweets-per-second (TPS) revealed that social media interaction mirrors real-life communication during these situations.

"On Twitter, you can see the world gradually draw its attention more to the screen as the shot nears. When the referee blows the whistle, Twitter goes nearly silent as all eyes are glued on the crucial kick. The shot is taken, and Twitter as with fans worldwide erupts into applause, disappointment and elation," explained Miguel Rios, data science manager in the Twitter blog.

"If you've been to a World Cup viewing party, you've probably noticed the same phenomenon: the bar buzzes with excitement as a player gets ready for his shot, and bursts into an emotional reaction based on its outcome but went silent in between, for that moment as his laces met the ball and it curled towards the net." 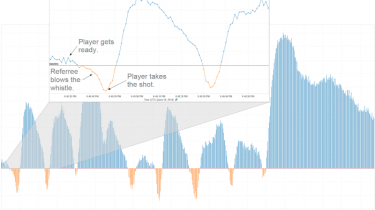