Windows 10 Technical Preview: Is Microsoft back in business?

Microsoft’s bending over backwards to court businesses with Windows 10. Does it offer enough to justify upgrading from Windows 7?

Microsoft may be calling it Windows 10 because it's a "great leap forward", but truth be told this feels more like a mashup of the last two editions - a Windows 7.5 if you will.

Nowhere is this compromise more evident than on the returning Start Menu, which will now appear by default on all devices bar tablets. The left-hand panel is a return to the Start Menu of yesteryear, with shortcuts to frequently used programs, File Explorer, settings and the missed search bar. The right-hand side is an abridged version of the Windows 8 Start Screen, housing tiles for the Windows Store apps. 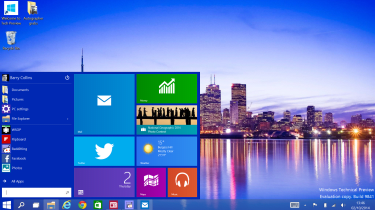 This right-hand panel can expand as new apps are pinned to the Start Menu, or be eradicated entirely by unpinning all of the Windows Store apps. This could prove popular as a default configuration for IT managers who don't want employees confused or distracted by Windows Store apps.

Windows 10 is a massive attempt to lure businesses back on to the upgrade path.

The Start Menu can also be resized, so you might have it as a thin-wide strip running across the width of the screen or a tall menu running up the entire left-hand side. Having originally attempted to foist the one-size-fits-all Start Screen on Windows 8 users, Microsoft has wisely decided to put choices back into the hands of the user.

Microsoft's Start Screen hasn't disappeared altogether. It will still be the default option on tablets (as it was on our test Surface Pro), and laptop/desktop users can enable it by right-clicking on the taskbar and fiddling with the Properties settings. But there's currently no best of both worlds scenario: you must choose one or the other, which seems needlessly restrictive.

That is, unless you own a hybrid device, in which case Windows will revert to the Start Menu when keyboard is plugged in, and Start Screen when you go into tablet mode although "Continuum mode" wasn't quite ready in time for the Technical Preview.

Apps on the desktop

The inclusion of Live Tiles on the Start Menu isn't the only way in which Microsoft is trying to usher desktop/laptop users towards the apps in the underperforming Windows Store. As with Windows 8.1 Update, Windows Store apps can be run from the desktop, with their own icon on the taskbar.

Now, however, those app windows can be resized into whatever dimension the user chooses, just like regular desktop apps. For those using large desktop monitors, it makes the Windows Store apps more accessible, as does the new option to snap an app to the side of the screen and then take your pick from other open applications to fill the other half. 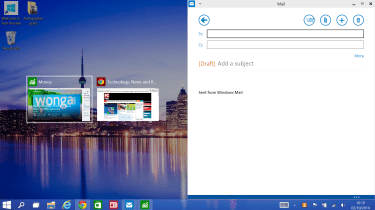 That's not to say Windows 10 is suddenly going to transform the fortunes of the Windows Store. Fundamental problems remain with most apps designed for full-screen tablets, not mouse and keyboard. Trying to design apps that look right and work perfectly on anything ranging from an 8in tablet to a 27in desktop monitor is a tall order, and one that many app developers may not have the stomach for.

Microsoft was fairly accused of ignoring the needs of desktop users with Windows 8, and it's Windows 10 looks like it will make amends. First comes the introduction of multiple desktops, an idea that has long been a staple in Linux distros and Apple's OS X. For professionals, it means you can devote different desktops to different tasks, perhaps preventing distractions from email or Twitter feeds as you concentrate on a particular project. 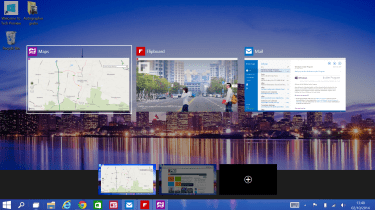 The multi-desktop system is smartly implemented, but does have limitations. A new icon on the taskbar lets you enter Task View, displaying thumbnails of all the applications open on the currently selected desktop and the option to switch between different desktops.

If you want to flick back to an app (either Windows Store or traditional x86 application) on a different desktop, you can select it from the taskbar or use the revamped Alt + Tab shortcut. A little transparent bar underneath the app's taskbar icon tells you it's currently open in a different desktop.

The limitations comes from not being able to run different instances of the same app on different desktops. So, for example, if you wanted to create one desktop for work purposes, and one for personal use during your lunch break, you would only be able to run your web browser in one of those desktops. It limits the practicality of multiple desktops, although we can see why running numerous instances of the same app might also cause headaches. Again, we'd like to see Microsoft give users the choice when the final version is released.

Multiple desktops isn't the only idea Microsoft has borrowed from the Linux world. After delivering two significant refreshes of Windows 8 in just two years, Microsoft is mollifying IT managers who might be put off by the pace of change, allowing them to opt out of all but the most essential updates. This means Windows 10 PCs will continue to receive security updates and fixes for critical flaws, but won't be upgraded with new features or UI revamps, unless IT managers choose to install them.

In many ways, it's similar to the two-track approach taken by Ubuntu: the stable Long Term Support (LTS) version is released every two years and is favoured by businesses, whilst the main OS continues to be refreshed with new features every six months for consumers.

IT managers will be given the option to run mixed environments, so certain mission-critical PCs can be put on the limited updates, whilst others can continue to benefit from the new feature drops in Windows Update.

It's clear Microsoft is making a massive play to lure businesses back on to the upgrade path with Windows 10. Windows 8 proved too much of a culture shock for most firms; Windows 10 provides a less intimidating transition for those still on Windows 7, or even Windows XP.

Yet there's still grounds for caution. Microsoft's senior marketing manager, Brandon LeBlanc, says "what you see today in the Windows 10 Technical Preview barely scratches the surface of what is to come," which suggests the changes planned for the final version of Windows 10 due mid-2015 could be even more dramatic.

Huge question marks hang over Microsoft's overall strategy, too. Is there anything here that makes Windows tablets more compelling for either consumers or business? Not really. Will the Windows Store suddenly take off because you can resize app windows? No.

Windows 10 is a compromise OS, an olive branch to the billions of Windows 7 users in offices and homes worldwide. It isn't, at least from what we've seen so far, the Windows that's going to sell the next billion PCs.