Visual Studio Code: Everything you need to know 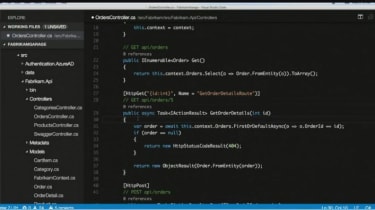 Microsoft kicked off its Build conference by unveiling Visual Studio Code, a free code editor that works across Windows, Linux and even OS X.

Visual Studio Code is a lightweight editor for writing web and mobile apps. It's the first in the Visual Studio software line that's truly cross platform, with the original Visual Studio app remaining Windows only.

S. Somasegar, Microsoft's corporate vice president of its developer division, told TechCrunch: "A lot of people use Windows as their development environment, but we are also seeing a lot of people on Linux and Mac. Instead of making them go to Windows, we want to meet them where they are."

What is Visual Studio Code?

The editor is based on Electron, a piece of software that is based on Chromium, which is used to deploy io.js applications.

Developers can use the tool to build web applications in JavaScript, TypeScript, ASP.NET 5, among others. It will also help developers integrate with Microsoft's Azure and Visual Studio Online. Microsfot  said the tool seemlessly integrates with package managers and code repositories.

The tool is based on files and folders. Users can open a file or folder that contains project files or code. The user interface comprises an editor, viewbar, status bar and sidebar. IT also supports side by side editing so up to three editors can be opened up together.

An explorer window can be used to manage folders and files and here these can be created, moved, deleted or renamed. Auto save can be enabled to automatically save chages to disk.

Also featured in the tool is a search function allowing users to search for text in code or files.

The preview of Visual Studio Code is available here for free.