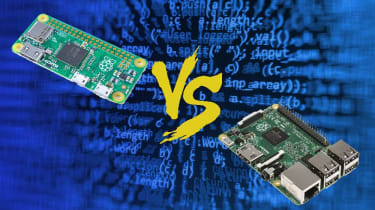 The Raspberry Pi Zero is a little computer that's made a big impact. It's the latest single-board device from The Raspberry Pi Foundation, which has been stunning the world by continually making computers smaller and cheaper than anyone had thought possible.

It's so popular, in fact, that when the official Raspberry Pi magazine gave away free units with every copy, the issue sold out inside of a day. Plus, we were very impressed with it ourselves as our full stand-alone review shows. With tech-heads clamouring to get their hands on the Raspberry Pi Zero, we put it head-to-head with its predecessor to see whether or not it's really better than the Raspberry Pi 2 Model B.

The Raspberry Pi Foundation is touting the Zero as having "twice the utility of the Model A+", and there's no denying that. However, it's slightly more evenly matched when it comes to the B version.

Running at 1GHz, the CPU has a speed edge over its older sibling. On the other hand, it's only got one core, whereas the Model B has a quad-core SoC. The B also beats the Zero in the RAM stakes, with a 1GB allocation compared to a mere 512MB. This makes it much more capable for multi-tasking, especially the kind used in traditional desktop computing.

Aside from that, the main difference is in the ports. As is to be expected from a device that's significantly smaller than the average business card, the Pi Zero isn't exactly overflowing with ports and connections. In fact, it's got a mere three one USB On-The-Go (OTG) port for data, a micro USB port for power, and a mini HDMI slot for display.

In this arena, the Raspberry Pi B is the much better option, with four full-sized USB ports, a full-sized HDMI output, an audio jack and even an Ethernet port. The two are equally matched in terms of GPIO pins, with 40 apiece.

Naturally, the Raspberry Pi Zero has the edge here the fact that you can virtually pick it up for pocket change is one of the reasons the device sold out within hours. However, while the Pi Zero's big brother is more than three times the price of its newest sibling, it's not bad value by any stretch of the imagination.

In fact, it almost evens out once you factor in the cost of all the associated peripherals. As the Pi Zero's diminutive size only allows for a USB OTG port, you'll need to shell out a few pounds for an adapter cable and then around 10 for a powered hub if you're wanting to use it as a proper computer.

Because it's also lacking the Ethernet port seen on larger models, you'll also most likely want either a USB Ethernet adaptor (around 10) or a USB WiFi adapter (5-10). This pushes the total cost of the Pi Zero to between 20 and 25, and into the same ballpark as the Model B.

This is the real kicker. As with the earliest runs of the Raspberry Pi, the Zero has proved so popular that demand has outstripped supply by a huge margin. The Foundation is now racing to print more units, but judging by previous experience, the Raspberry Pi Zero is going to be hard to come by for the foreseeable future.

The Raspberry Pi 2 B, by contrast, is in more than ample supply. Distribution partner RS Components has over 52,000 in stock at the time of writing, with more in the hands of other resellers. This makes the model B an excellent fallback option for those who need their microcomputing fix right now.

While the Raspberry Pi Zero is currently the hottest ticket in town, consumers may want to consider whether they're being beguiled by its petite frame and cheapness. It's a fantastic device and a marvel of engineering, but its lack of inputs and slimmed-down RAM limit its utility for many applications.

Unless you're really strapped for cash or need the form-factor stripped down to the absolute bare minimum, the Raspberry Pi 2 B remains the more capable if slightly more expensive option.