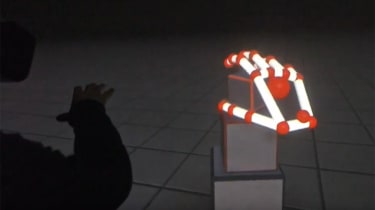 The company specialises in hand-based motion control, and in 2013 released a device allowing users to control their computers with gesture commands.

Orion is an extension of the company's existing software, built specifically for virtual reality headsets like the Oculus Rift and the HTC Vive.

With Orion, the company claims it has made a host of advancements over previous iterations.

In order to demonstrate this, Leap Motion has produced Blocks, a demo app showcasing Orion and the company's forthcoming interaction engine.

Users can spawn cubes and polyhedral shapes of various sizes, then pick them up and manipulate them at will. They can throw them around, and even turn the gravity on and off.

The demo is intended to show off not only how fast and accurate the hand-tracking is, but also how easy it is to use it within a physics engine, something that's crucial for many VR games.

The company has released the beta version of the software for free here, and anyone with a Leap Motion device and an Oculus Rift DK2 can download and try it.

While all of the major VR players are working on motion-control systems to allow direct interaction, Leap Motion is so far the only company to directly integrate full hand-tracking, independent of any controllers.

In many ways, this is the goal that projects like Oculus Touch and the HTC Vive's controllers are trying to reach, as both offer not just motion control but the ability to semi-realistically reach out and pick up objects.

The company said it is "working directly with OEMs to embed Orion hardware into VR headsets", meaning it could potentially end up in all three VR headsets hitting the market this year.