Not the best designed central console, but it’s affordable and easy to deploy 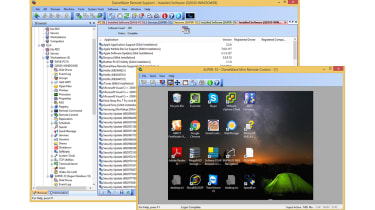 DameWare Remote Support is one of the few solutions that can do most of its work without an agent installed on each desktop. It integrates with Active Directory and provides plenty of tools for administering domain objects: containers, groups and users.

However, it does rely on an agent installed on the target system when using the Mini Remote Control utility, through which you can connect to a system from almost anywhere. This can be loaded only for the duration of the support session and, when you finish, it removes itself. Otherwise, basic remote control is achieved using Remote Desktop Protocol.

The Mini Remote Control utility can be accessed from the main Remote Support interface or loaded as a separate application. We found iteasy to use for our Windows systems.

We tested the standalone version, but DameWare also offers a Central Server edition for larger, distributed businesses. Both are good value, with licensing based on the number of remote support technicians andnot the systems being supported.

When first opened, the Remote Support console checks the network and presents a list of detected domains and workgroups in a tree structure, which placed the servers and workstations on our test setup in separate, easy-to-access groups.

Selecting a system opens a complete overview of its hard disks, with graphs of free and used space, a table displaying more detail, and direct access to Windows' optionto restore previous versions.

The console displays the selected system's event logs and running processes, and if the remote Registry service isn't running, it will start it for you. We could then remotely view and edit its Registry, and reboot or shut down the system.

We loaded a command-line prompt, event viewer and performance monitor for the remote system from the System Tools section. Rather annoyingly, every tool selected adds a quick-access tab at the top of the central window, which doesn't close down when you select another.

It's all too easy to end up with ten or 20 tabs loaded without realising it. And some of the options hint at DameWare's age, such as when it tries to load vintage apps such as NTBackup and the Windows NT User Manager.

DameWare doesn't perform an inventory on your remote systems and store the information, although it will scan each system's properties to show details of its CPU, memory, graphics and so on. We could also view all installed software, but each time this was selected, the console queried the remote system to pull in a list. This could then be exported as a CSV file.

You'll only need to use the DameWare Remote Support Service agent to access a small number of features, including the remote command viewer and console, plus the system reboot and shutdown commands. When we selected these, DameWare offered to load the service on the target system for us.

DameWare can connect to Macs using the VNC service, and we had no problems with our MacBook Pro running OS X El Capitan. You'll need to edit its screen-sharing options to allow VNC viewers to connect to the system.

For large networks, the Remote Support console will look busy and it includes a few redundant tools. That said, its agentless architecture makes it easy to deploy, and basing prices on the number of technicians make it good value.

For large networks, the Remote Support console will look busy and it includes a few redundant tools. That said, its agentless architecture makes it easy to deploy, and basing prices on the number of technicians make it good value.