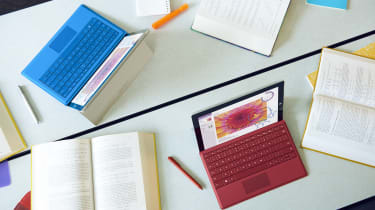 Microsoft OneNote can help dyslexic children learn to read and improve their spelling, according to research sponsored by the company.

Working with the British Dyslexia Association (BDA), Microsoft doled out Surface tablets to Knowl Hill School in Surrey, which specialises in helping children with dyslexia and other learning difficulties, including attention deficit disorder and dyspraxia. OneNote helped pupils track their notes, make drawings and sketch ideas, alongside standard features such as spellcheck that alerts.

After the 11-week trial across 16 pupils, the BDA said children with the technology setup "made more progress than would generally be expected for children of their age over the same time period" across different reading metrics. The BDA pinned the accelerated improvement on pupils having "more strategies to apply" using the notetaking software, with eleven children moving from one band of scores into the next.

Reading skills weren't the only progress seen by teachers. "Emotional wellbeing, self-esteem and self-confidence are often key issues for dyslexic young people, who may have experienced a sense of failure within the education system due to their struggles with the acquisition of literacy skills and other related problems," the BDA stated in its report. "Often for these young people, one of the first steps in helping them is to enable them to believe that they can be successful learners, and this can involve considerable rebuilding of their self-confidence and self-esteem."

With such a small, short trial, the BDA is hoping for further research. "Further, extended research would be appropriate, using larger samples and a longer implementation period. This is particularly appropriate given the time required to become familiar with the use of technological tools."

Paul Grove, doctoral candidate at the University of Oxford, agreed that technology has been shown to help such pupils with their reading, particularly when used from an early age, he added.

Previous research has suggested that the ability to alter how text is displayed, record voices and make mind maps, such as on tablets or other digital devices, can make reading easier for anyone facing such issues - with one study suggesting reading speed leaps by more than a quarter.

Such technologies help because they allow pupils to develop their own "multi modal techniques" they can go their own way, and figure out what works best for them. "It makes individuals more autonomous and independent from an early age."

"Research does suggest that, and my own personal experience of having dyslexia also suggests that's a benefit," Grove said. And that makes it easier for pupils with such challenges to keep pace with the rest of the class. "Technology can present a level playing field."

That doesn't mean technology is the only solution, and it's best to have a "series of strategies," Grove noted. However, he added that such techniques aren't limited to those with dyslexia and other similar challenges, but can help improve reading skills for everyone.

Grove told IT Pro that any study in this area is welcome particularly as government cuts bite but added that more research was required in the use of technology to aid people with dyslexia, in particular calling for trials with control groups to better track progress.