Although almost half of people are happy to try e-signatures, they are hesitant about security 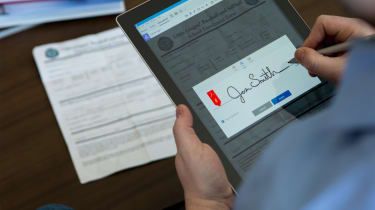 The company questioned 2,000 members of the public about signing documents and although 80% of respondents said they are using hand printed signatures less than they used to, it's still contributing to 6.8 hours a week of wasted time.

However, almost half of those asked said they would consider using e-signatures more if in increased their productivity and allowed for them to concentrate on what they consider to be more important aspects of their job.

"Nowhere can the benefits of e-signatures be felt more than in the workplace, with people able to bring greater time efficiencies to their day instead of chasing people for handwritten signatures as a result of working in a paper based office culture," Mark Greenaway, Director Emerging Businesses EMEA at Adobe said.

"Although we will always strive to put the personal touch on things such as birthday cards and gifts via our handwritten signatures, the workplace will certainly benefit from the digital alternatives on offer e-signatures just one of these," he said. "As a result, we'll no doubt, see handwritten and e-signatures existing side by side for many years to come."

Over a quarter of respondents said they are most likely to use an e-signature for signing contracts and other work documents that require a signature. More than a third said it's a less time-consuming way of putting their stamp on something because they don't have to find a pen, which is seemingly a problem in digital workplaces, while 28% think it will help their organisation embrace mobile working more, because employees don't have to be present to sign - they can do it on the move, across devices.

"Misconceptions do still exist though, particularly when it comes to the security and accuracy of e-signatures," Greenaway added. "However, people should remember that e-signatures use a variety of common electronic authentication methods to verify signer identity meaning that they are far more secure and can be a great for getting documents signed and processed quickly. Many organisations are already benefitting from e-signatures amongst other digital capabilities."