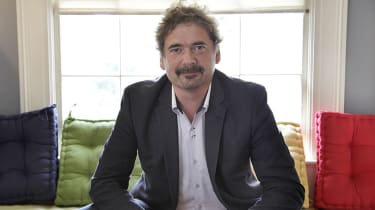 Jon Von Tetzchner has been trying to fix the web for decades. Amid Senate hearings into Russian influence extended via Facebook, creeping surveillance for advertising on Google, and the many other challenges facing life online, he believes he has the answer and it isn't his new browser, Vivaldi.

Instead, the founder of first Opera Software and then Vivaldi Technologies argues there's only one solution: regulation.

Asked if the answer to Google's dominance is encouraging web users to download his Vivaldi browser, he says no. "That's useful, but I will be frank on this, because I think it's important: to fix that problem needs a different solution," he tells IT Pro over coffee at a London hotel. "We'll try to keep them safe as possible, but the societal problems ... need to be resolved at a different level."

He adds: "That's what we have government for."

For that, he doesn't believe we necessarily need new laws indeed, von Tetzchner questions the focus of EU regulation such as GDPR that puts the focus on individual decisions. For example, when you get a new phone and tick the permission boxes, you're agreeing to being stalked, he says but there's no alternative, aside from not having a smartphone. "To me, that's where something went really wrong," he says. "We had phones before without giving up all this information."

Individuals shouldn't be able to give up their rights either, von Tetzchner says, as it has wider effects. "Because it impacts society, we can't just leave it at an individual level," he argues.

He also questions plans to make it easier to see what data companies hold on each of us. "Not only are they collecting the data, but they're making it easier to get access to it and these guys are so good at not having anybody hack into their data," he says, revealing exactly what deadpan Icelandic sarcasm sounds like. "If Google or whoever says you can go into your account and see what we hold, anyone else with a bit of technical skill can do the same."

Won't regulation hurt tech industry revenues? "I'm pretty sure these companies would survive this change, thrive with this change, or even do better because of it," he said. "But they need their hand forced by regulation, as I don't think their investors would let them."

Once again, it's down to business model: startups with investors can't behave as well as their founders ethics' may like, as they aren't the only ones with a say, while larger public companies have shareholders to answer to and they usually want to push for more growth, regardless of the consequences, von Tetzchner argues. "I'd like to believe these guys are good at heart, and there's a reason they're not doing the right thing here they should use this chance to make it happen."

All of that is one reason why von Tetzchner has self-funded Vivaldi it gives him the control to build the browser he wants. "It isn't a financial play," he says. "There are no other investors. The reason for that is we don't want to sell the company and go public, we just want to provide the best possible services."

Right now, Vivaldi is losing money von Tetzchner's money but he expects the software company to start generating profits soon enough. It earns revenue by providing a few services and affiliate links; when a user clicks through, Vivaldi gets a cut.

The aim is to earn a dollar per year per user. "We're almost there," he says. "I think we can do more than that and still be nice guys and not sell out our users or do anything silly."

The other goal is to increase the number of users. He figures Vivaldi needs between three to five million users to do well it's currently close to a million. "In the meantime, it's funded by me," he says.

While Vivaldi's business model is convincing who doesn't want a wealthy protector in their corner? the technology has to stand up, too.

He suggests the Vivaldi browser is particularly handy for businesses and professional users because of its focus on productivity. "If you're using the browser as a tool for work, we have all you need: splitting windows, great handling of tabs and speed dials and a nice presentation of your history," he says. "There's a lot of functionality that's all about productivity. You're spending so much time on the web, let's make it pleasant and effective."

There are a few pieces missing from Vivaldi, which remains in its first version. Much awaited features that are coming soon include syncing across browsers, a mail client and a mobile version von Tetzchner said he's already using previews of each feature. Sync is taking longer than expected because it requires setting up Vivaldi's own server system, as it's hardly going to send your data to Google or Amazon, he notes.

All of those features have been much begged for by Vivaldi users, he says. Rather than rely on telemetry data to uncover what users wish for in the browser, Vivaldi keeps it simple and just asks them. "We want to give everyone what they want," he said. "It's our principal: you might be alone in asking for something, but we'll do it either because it's simple or because someone else might like it."

He adds: "A lot of what we're doing is adding a way to do something when there's already five ways to do it. We are finding people want the sixth way."

That doesn't burden the browser adding a new input method is a line of code, he says and it's an admission that there is no such thing as an average user, nor a right way of doing anything.

"I always felt it's about the individual," von Tetzchner explains. "The problem when you do things in numbers is you go for the average user, but the average user doesn't really exist. You take away anything that's a bit special." And that means when it comes to using a browser, there needs to be a multitude of ways to do the same task be it by mouse, keyboard shortcuts or whatever else.