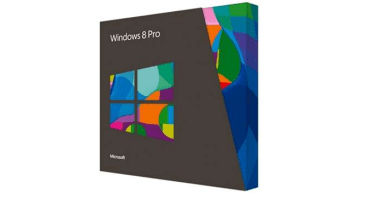 It's fair to say the launch of Windows 8 late last year didn't go entirely as Microsoft bosses hoped. In fact it ended up with the president of Windows, Steven Sinofsky leaving his post.

For better or worse, Microsoft chose to give the public a whole year to try out the various beta releases for free, and it was the new OS's controversial "Metro" interface that bore the brunt of the early, mid and late criticism.

Hardcore users felt it was being unnecessarily forced upon them, novice users wondered how to manage without the Start button, and the long-running furore overshadowed any fair appraisal of an OS that, when you delved beneath the surface, actually introduced some good features. Now, a few months on from release the dust has cleared, so we can take a step back and focus on what Windows 8 has to offer from a business perspective.

It's a shame the interface changes Microsoft made grabbed all the attention, as there are some core features that really should have been the talking points of Windows 8 upon release.

First up, Windows 8 doesn't technically shut down when you tell it to any more, instead adopting a hybrid hibernation state, and this allows it to boot quickly. We upgraded a powerful Core i5 desktop PC from Windows 7 Ultimate to Windows 8 Pro, and the total boot time dropped from 32 seconds to 19 seconds and that's on a cluttered system, complete with antivirus software and other startup items, booting from a cold start. Resuming from the very reliable sleep mode took just six seconds, and you can expect that to be even quicker for freshly installed systems booting from an SSD.

If your motherboard is recent enough to support it, Windows 8 is the first OS to make use of the optional UEFI Secure Boot feature, which defends against rootkits and malware. If any unauthorised modifications have been made to the OS, Secure Boot won't be able to verify the digital signature from Microsoft, and the system start-up will fail right at the beginning before any damage has been inflicted. There's been some concern that Microsoft has made the feature compulsory on Windows RT devices largely to prevent users from installing Linux and other operating systems on the Surface, but that seems unfair it's little different from the way Apple locks down iOS on the iPad, after all.

BitLocker can now be provisioned and a volume encrypted before the OS even begins its setup process, and you can now choose to encrypt used space only rather than the entire disk, which saves a lot of provisioning time. Once you're into the OS proper, Microsoft has morphed its various antivirus and antimalware offerings into the bundled Windows Defender although you're free to replace it with third-party software, as ever and the SmartScreen phishing filter has made its way from Internet Explorer into the core of the OS. It can perform a reputation check on any downloaded file or application in the background, and gives an unmissable full-screen warning (which you're free to ignore at your peril) if the signatures don't match up. Finally, Windows Update is no longer quite so frustratingly unpredictable, waking the PC and installing important updates at a set maintenance period, or at the earliest subsequent reboot if the system is in use. 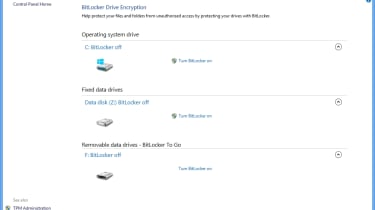 Data in Windows 8 is protected, backed up and made available on the move in a variety of ways. Storage Spaces is a wonderful new feature that lets you combine multiple physical disks of any make and capacity into virtual storage "pools", whose combined capacity you can then distribute into any number of virtual disks. It's easy to set up pools for greater resiliency with vital data, you can encrypt them with BitLocker, and as space runs out you can simply add more disks to the pool without the user having to worry about the physical location of any data. It's a superb tool, and a great way to keep older storage hardware in use. 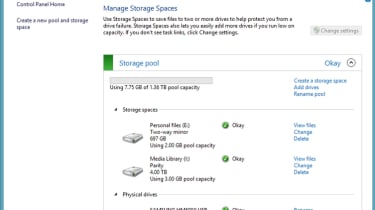 Windows 8 finally supports ISO files natively, as well as VHD files, and the Pro edition includes the Hyper-V virtual machine manager from Windows Server (if you can't see it, go to the Control Panel and it's under "Turn Windows features on or off"). The Windows 8 version lacks GPU virtualisation and some network features from the server version, but it's a welcome addition nonetheless.

On a more personal level the traditional backup feature has gone, replaced in part by File History, which stores incremental versions of files on external storage hardware. Similar to Windows 7's Previous Versions in many ways, it monitors your main file locations and backs up any changes it detects; the user can roll back effortlessly to any version of a file. Admins can use File History as an extra way to automatically protect employees' core files.