Good software is tested software, but how do you do it and which tools are best to use? 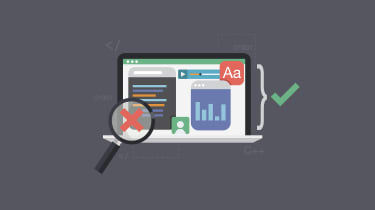 Such tools can also be used to achieve software development project goals and make sure the software meets the overall requirements of the business.

They can include other management services, such as project management and bug tracking features, as well as supporting collaboration between developers and software testing professionals.

To help get you pick a tool that meets your needs, we've put together a selection of some of the best software testing tools available today.

Practitest offers a full suite of testing tools for businesses wanting to check their software ticks all the boxes and is released bug-free to the wider world. It supports external sources too, such as Jira, Bugzilla and Redmine, as well as automation tools such as Selenium, TestComplete and QTP and other development and testing platforms at a lower cost than its direct competition.

Additionally, the user interface is particularly smooth, with a flexible dashboard allowing each team member to add their own new tabs, just for them, so they can prioritise the tasks that are most important. This is all presented in a grid format, making it simple to understand the current state of play and current status of projects.

Information can be easily filtered and organised using filter trees and hierarchical search and with scheduled reports, so any stakeholders can receive the information they need as the project progresses. It's simple to understand how many test cases have passed, failed or not run from the dashboard and with fully-supported UAT and regression testing, it's an extremely useful tool for development teams.

But one of Practitest's most praised features is its levels of support. According to real-world reviews, queries and help can be provided if something goes wrong, which makes this a top-level option for businesses attempting to make sure their software truly measures up. 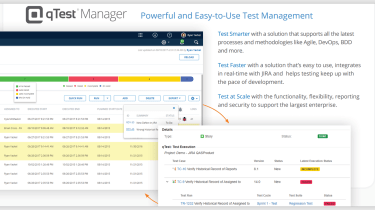 qTest has been developed by AQSymphony to test software and services built for agile and DevOps project management teams. It works in-browser, with a smooth UI to help businesses partake in test management, automation and reporting.

It's a powerful tool, with real-time integrations available for Jira Software, VersionOne, Rally and a whole host of other environments, plus compatibility with Jenkins and accessibility on GitHub so everything can be tracked as it's tested and made available to wider teams if needed.

Testing can be scheduled and automated, substantially saving time and resource, with full support for reporting and analytics that again, can be shared with teams to understand the progress of a project and what needs to be updated quickly and accurately.

Other test cases can be imported from alternative data sources such as Excel or other case management tools. You can create multiple versions of test cases if you want to reuse them in future and share these across project teams if they are applicable to other projects n the organisation.

Entire projects can even be cloned or copied to make it much faster to get testing, without the need for extra members of staff just to manage the testing process. 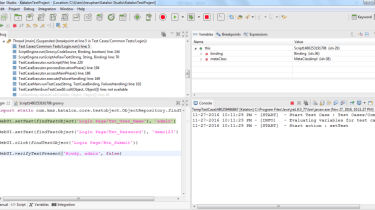 This software testing tool has the components needed to carry out automated testing. It's also completely free.

Claiming to have a user-friendly interface, Katalon lets its users quickly create, execute and maintain tests. There are also detailed tutorials, documentation and templates to get users off to a quick start.

The tool fully supports web, Android, iOS and API testing on all operating systems. It also integrates with Jenkins, GIT, JIRA, and qTest with native plugins.

This is an open source portable software testing framework for web applications. It provides a playback function for authoring tests without needing to learn test scripting languages.

It also can test in several programming languages including C#, Java, Perl, PHP, Python, Ruby and Scala. Tests can be run against most browsers and can be deployed on Windows, MacOS and Linux.

Selenium has several components. The Selenium integrated development environment for tests enables users to run recording, editing, and debugging tests. The client API can be used to communicate tests to Selenium by calling methods in this API. Lastly, WebDriver accepts commands (sent in Selenese, or via a Client API) and sends them to a browser. 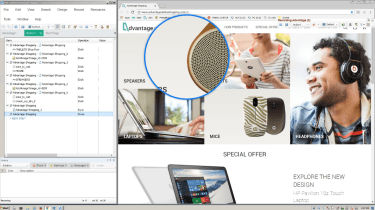 It carries out this testing via a user interface like a native GUI or web interface, identifying objects in the application user interface or a web page and carrying out operations such as keyboard presses or mouse clicks.

It uses a VBScript scripting language to state the test procedure and to operate the objects and controls of the application under test. 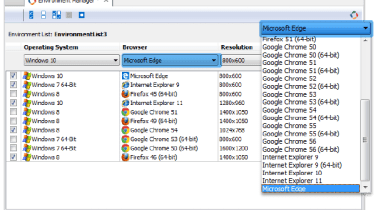 It also features the ability to record robust, automated tests without scripting knowledge.

Users can perform regression testing to examine new builds of software. There is also a plugin for build tools like Jenkins to enable users to perform immediate testing for all changes without a manual setup.