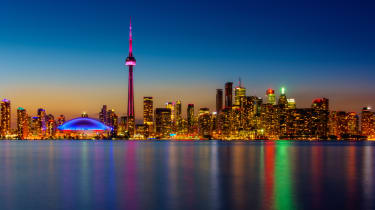 The Canadian government is being sued by a civil liberties group over a Google-backed plan to build a smart neighbourhood in Toronto.

The group is the Canadian Civil Liberties Association and says the project, which is run by the publicly funded Waterfront Toronto and Google-affiliated Sidewalk Labs, is invalid and needs to be reset. Privacy advocates are concerned the project will increase surveillance and outsource government responsibilities to a private corporation.

"Canada is not Google's lab rat," said the association's executive director MJ Bryant to the BBC. "We can do better. Our freedom from unlawful public surveillance is worth fighting for."

Sidewalk Labs, which is a firm owned by Google's parent company Alphabet, won a bid with Waterfront Toronto in October 2017 to develop a 12-acre patch of an industrial landscape in Toronto, Ontario into a smart city.

However, the deal struck between the government-funded organisation and Sidewalk Labs has been controversial and shrouded in secrecy.

"In Toronto (Sidewalks Labs) is aiming to take over the functions of government - do we really need a coup d'tat to get transit and nice paving stones?" said waterfront resident Julie Beddoes.

As yet, Sidewalks Labs have not submitted a development proposal, though it has said one will be sent this spring, in response to the lawsuit, Waterfront Toronto said it is too early to assess the claims.

"Waterfront Toronto shares the Applicant's interest in ensuring robust protection for privacy at Quayside," the company said in a statement. "At this point Waterfront Toronto has not received a plan from Sidewalk Labs, its Innovation and Funding Partner for Quayside. Therefore, none of the claims in the CCLA Application can be assessed yet because we have not yet received or considered Sidewalk Labs' Master Innovation and Development Plan."