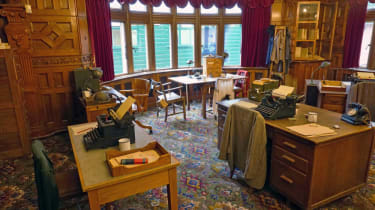 The iconic WWII coding centre Bletchley Park, now a museum dedicated to the history of coding in the UK, has received a sizable donation from Facebook to support its day-to-day operations.

Facebook has committed £1 million to support the centre’s continued existence and mitigate the worst consequences of the severe financial implications of COVID-19 on the Milton Keynes-based museum.

The Bletchley Park Trust revealed in August it was due to hit a £2 million deficit by the end of 2020 as a result of a reduction in visitors and revenue. Social restrictions in order to contain the virus have seriously harmed the revenue of many venues, including the historic centre.

For Bletchley Park, this meant eating into cash reserves that were otherwise allocated to long-term projects in order to support day-to-day operations, and opening consultations on making roughly a third of staff redundant.

The centre was also forced to pause certain activities and slow development in certain areas in order to navigate through the next two years. Facebook’s donation, as well as a £447,000 grant received from the government’s Culture Recovery Fund, means the changes and job losses might not need to go as far.

Facebook’s chief technology officer Mike Schroepfer paid tribute to the historic codebreaking achievements made at Bletchley Park during WWII, suggesting Facebook simply wouldn’t exist if not for the centre.

“The work of its most brilliant scientist, Alan Turing, still inspires our tens of thousands of engineers and research scientists today, and is foundational to the entire field of computing, which has and will continue to shape the lives of billions of people,” Schroepfer said.

“As a company that benefits endlessly from the diversity of our staff and the billions who use our services, the history of Bletchley Park is one we want the whole world to know about.

“From the long-overlooked role played by the thousands of brilliant women who made the operation a success, to the long-overdue reckoning with the persecution of Alan Turing over his sexuality, Bletchley Park is yet another example of how the story of technology is also the story of the society that creates it.”

Although Bletchley Park is considered something of a national treasure, the centre has struggled over the years to raise enough money to comfortably keep its doors open, relying on donations from the public as well as sizeable cash injections. It doesn’t help that the building itself is historic and in need of constant maintenance, with the Bletchley Park Trust often running campaigns in order to fundraise.

The centre, for example, ran a campaign in 2018 to raise £7 million to look after the ongoing cost of the museum, as well as a further £10 million needed to ensure the grounds and buildings are in a suitable condition for future visitors.