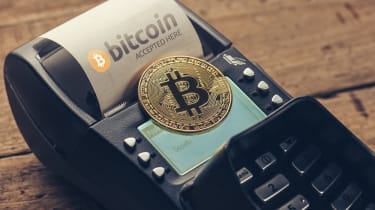 A cryptocurrency exchange platform has partnered with Visa to launch a debit card allowing UK users to pay for goods and services using digital currencies like Bitcoin and Ethereum.

The Visa-powered debit card, known as Coinbase Card, will allow users to select a cryptocurrency wallet to associate with the tool through a designated iOS or Android app. People can then make payments via contactless or using chip and pin, as well as make cash withdrawals from ATMs.

The Coinbase Card will essentially behave in the same way as conventional debit cards supplied by banks, with users' cryptocurrency converted to established currencies instantly upon transactions being made.

The designated app, meanwhile, allows users to link a cryptocurrency wallet with the debit card, and also offers instant receipts as well as transaction summaries and spending categories, among other features.

All cryptocurrencies supportedon the Coinbase platform, including Bitcoin, Ethereum and Litecoin, will also be supported on the debit card.

Although hype around digital currencies, predominately led by Bitcoin's emergence into the mainstream, has ebbed and flowed in recent years, blockchain-powered cryptocurrencies have never been widely adopted as an actual form of payment.

Instead, cryptocurrencies are often used by investors as speculative assets given their tendency to violently fluctuate in the market.

Only last week the price of Bitcoin surged 20% due to a mysterious mass investor who purchased roughly 20,000 BTC for unknown reasons across several exchange platforms. This had a knock-on effect for Ethereum and Ripple, which also saw smaller increases in their valuation.

This volatility has been the major obstacle blocking cryptocurrencies from being used as a form of payment for goods and services, not just for consumers but business users.

Moreover, while the technology to make cryptocurrency payments has existed before now, this has conventionally relied on businesses accepting cryptocurrency as payment, which the vast majority have shied away from.

But the launch of Coinbase's cryptocurrency debit card, the first such card of its kind in the UK and EU, eliminates this barrier to some degree. Although users will be paying using their own cryptocurrency funds, these will be instantly converted, with transactions completed in conventional currencies like the pound and euro.

The Coinbase Card is only available in the UK for now, but the exchange platform plans to expand its support to other European counties within the coming months.