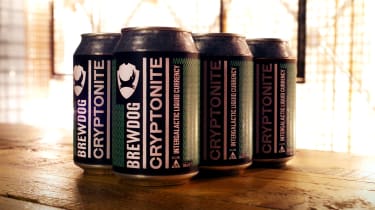 Scottish craft beer sensation BrewDog has opened up its long-running investment scheme to crypto enthusiasts, allowing potential investors to purchase shares with a variety of cryptocurrencies.

The Equity For Punks scheme, which is now in its fifth round of funding, has so far attracted more than 100,000 investors and raised in excess of 70 million for the company's expansion.

In addition to more conventional forms of payment, the scheme is now accepting Ripple, Ethereum, Litecoin, 0x, Qtum, Augur, OmiseGO, Bitcoin, Bitcoin Cash and Bitcoin SV, and any investors who invest via cryptocurrencies will receive a six-pack of the company's limited-edition Cryptonite west coast IPA. The current funding round has also been extended to April next year.

"Our Equity Punks are our community, our shareholders and our friends and the driving force behind our business," said BrewDog founder James Watt. "The growth BrewDog has shown over the last decade could only have been achieved with their encouragement and support and together we have shown the city slickers what can be achieved with taking charge of something you believe in. Cryptocurrency is exactly the same. If you embrace change to subvert the mainstream we are in your corner; whether your weapons of choice are malt, hops, yeast and water or blockchain."

The company, which operates more than 80 physical bars and venues worldwide, has courted crypto markets in the past, accepting cryptocurrency payments in its Canary Wharf bar, although a representative said "this is the only bar we offer this in for now".

The cryptocurrency industry has been experiencing changes recently, with Facebook attempting to muscle in on the nascent market with the launch of Libra and the G20 world leaders approving new regulations on cryptocurrency exchanges designed to fight money laundering and terrorism.