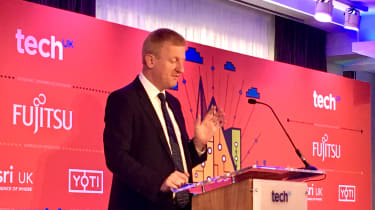 The government has launched a second wave of public sector projects for a 20 million digital transformation programme less than a year after its launch.

"I think everyone in this room agrees that in order to build a smarter state, one capable of delivering excellent digital services, a good relationship must exist between the public and private sector," Dowden said, before an audience of civil servants and industry representatives at London's County Hall yesterday.

"For the good of the country, I believe that the two have an obligation to work together, and I hope you see it as I do why this is such an important event. This is why I am determined, as minister, to champion this agenda."

Among the new projects is one involving the Northern Ireland Audit Office, which seeks data analysis techniques to boost performance, and another with the UK Border Force looking to automatically detect illicit goods during transit without hampering the fluidity of trade.

The first wave of five projects for the programme was launched in May, and included a Home Office project which used AI to detect still images from extremist origins.

Despite having the technology to detect online video propaganda with close to 100% accuracy, the system struggled with still images, as these are tailored more locally, and don't share any consistency. Five companies are now in the final stages of the selection process for the project.

Also among the new round of projects is the use of regtech, mainly deployed for financial services regulation, at the Department for Business, Energy and Industrial Strategy (BEIS), to identify and simplify the overlapping regulatory requirements businesses across the UK must deal with.

A lack of skills among civil servants, low public trust in technology, and insufficient access to ideas comprise some of the biggest hurdles to devising a coherent public sector-wide strategy, he explained.

"You know that government using technology, as the minister outlined, has changed significantly since we started running these conferences," he continued, adding: "But you also know that this is a very challenging time for government.

"More for less is a mantra, it's also really an existential situation, and what we want to do today is not so much highlight the solutions - although we do have outside [in the hall] some very interesting examples of that - but perhaps talk about the challenges - and the point the minister made is let's encourage solutions but let's find a way to deliver those within a transformation strategy."

The TechUK event also featured panel discussions in which IT leaders from public sector institutions, including the Department for Education (DfE) and the Driver and Vehicle Licensing Association (DVLA), discussed the specific digital transformation challenges their organisation faced.

These discussions helped to underline the scale of the challenge faced by the public sector as a whole and organisations such as the Government Digital Service (GDS) in devising and enforcing a coherent sector-wide strategy.

For instance, DfE CTO Helen Walker faces the challenge of simplifying and unifying the department's tech-driven services - having previously invested heavily in back-end systems - while DVLA CTO Dave Perry complained about having "put lipstick on a pig" in running services on systems that are up to 30 years old.

Elsewhere GDS' deputy director for capability David Dilley touched on the changing role of his organisation - shifting from one that built systems such as the unified .gov web platform, to one that issues guidance, and promotes frameworks of best practice.