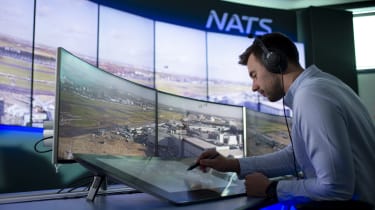 Traffic controllers at Heathrow airport are trialling artificial intelligence (AI) technology that could see the proposed third runway built without the need for a new control tower.

The airport has said that a 2.5 million "digital tower laboratory", with a suite of ultra-high definition cameras and AI technology, has been built at the base of Heathrow's existing tower.

It's hoped this technology can help human controllers to land more planes in difficult conditions where visibility is reduced, which is the most common factor behind flight disruption. Weather conditions like dense fog or low clouds can leave Heathrow's 87-metre tall control tower reliant on radar systems, which slows traffic down.

"Our capacity challenges are unique to our operation and we're always exploring new and innovative techniques to help us overcome these constraints and improve the passenger experience in a safe and resilient manner," said Kathryn Leahy, director of operations at Heathrow Airport.

NATS has deployed 20 ultra-high-definition 4K cameras at strategic locations around the airfield. The views from these cameras are then fed into an AI platform called AIMEE, which has been developed by the Canada-based Searidge Technologies. The AIMEE platform uses machine learning to interpret the images, track the aircraft and then inform the controller when it has successfully cleared the runway. The controller then makes the decision to clear the next arrival landing.

The original budget for the airport's expansion was 17 billion and included a new control tower, but the airport has been trying to reduce the budget. Last year the airport proposed a shorter third runway, during a public consultation, to help push the expansion plans through.

Despite government backing, the airport was told that the expansion must not mean higher charges for airlines, which would result in passengers paying more. British Airways operates about half of all flights at Heathrow and have repeatedly complained about the expected cost of the new runway.

The digital tower is being tested by air traffic management service NATS, which has begun a three-month test of the systems and could potentially have a big impact on airport logistics around the world.

"Right now we're focusing on when the control tower is in low cloud, where I'm confident we can make a very positive difference, but I am convinced that this technology can totally revolutionise how air traffic is managed at airports around the world," said Andy Taylor, the chief solution officer at NATS.