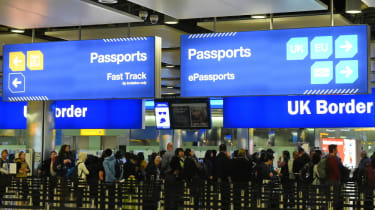 Travellers from seven non-European Union nations are now able to use the ePassport automatic gates found on the UK's borders in order to enter Britain.

Those nations are Australia, Canada, Japan, New Zealand, Singapore, South Korea and the United States, from which the government claims some 10 million people visited the UK in 2017.

The change is not particularly significant from a technical standpoint, as no new technology is being introduced to the ePassport gates. But opening up access to the automated border control system stands as an example of using the latest technology to ease often tedious and time-consuming processes in large organisations.

In this case, the expansion of those eligible to use ePassport gates will reduce waiting times for people entering the UK, as well as reduce the need for border control workers to man the gates.

Home Secretary Sajid Javid touted the move as a means to not only improve the security and "fluidity" of people coming to visit or work in the UK, but noted it would have economic benefits as well.

"Expanding the use of ePassport gates is a key part of this and allows us to improve the passenger experience of those arriving in the UK while keeping our border secure," said Javid.

"The new system will help to drive our economy, cement our reputation as a global leader and send a clear message to the world the UK is open for business."

The move will come into effect in June and represents another step along the digital transformation road for government organisations.