2,000 digital roles will be created, while 4,000 non-production positions set to make way for automation 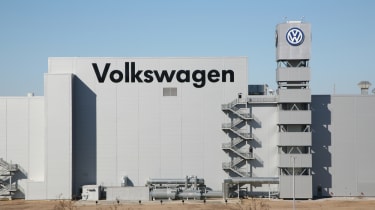 German car manufacturer Volkswagen will be investing 4 billion in digital transformation projects over the next four years with SAP.

At least 2,000 new digital roles will be created, mainly in administration, but also production, but some 4,000 jobs in non-production units at three of the company's bases will not be "restaffed" by 2023.

The IT part of the project will come from German software giant SAP and its SAP4/Hana enterprise package, which will be used for administration, purchasing and HR applications.

According to the company, the roles at Volkswagen AG Passenger Cars, Volkswagen Group Components and Volkswagen Sachsen GmbH will be made redundant as a result of digitisation, process automation and organisational streamlining.

"We are laying the sustainable foundation for making the company fit for the digital era," said Ralf Brandsttter, Volkswagen's chief operating officer. "We are accumulating new digital expertise and making all areas of our organization faster, leaner and more competitive.

"At the same time, we are creating new, modern digital and agile jobs and improving our productivity. 'New Volkswagen' is becoming more tangible for our employees. If we have to eliminate jobs as a result of digitalisation we are doing so along the demographic curve in the most socially responsible manner possible."

By "socially responsible", Volkswagen means that these positions will not be cut, not immediately at least. Instead, the car maker has put an agreement in place to guarantee employment for Volkswagen AG and Volkswagen Sachsen GmbH through to 2029.

Earlier in the year, the firm already announced up to 7,000 job cuts will be made by 2023 to make way for more automation, but at the time those losses were to be absorbed by 11,000 workers retiring in that period.

Those not up for the chop, however, will receive training with the company announcing further investment with an extra 60 million to its budget - making a total figure of 160 million.