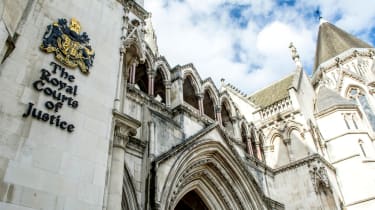 Ongoing plans to digitally transform the UK courts system to the tune of 1.2 billion are riddled with issues spanning from problems with online systems to the quality of Wi-Fi.

Poor digital skills among court users, limited access and unreliable technology are several factors that could scupper the Ministry of Justice's (MoJ's) plans to transform the courts system, the House of Commons' Justice Committee has claimed.

The digital transformation itself, too, is being threatened by the persistent use of unreliable video equipment and terrible Wi-Fi facilities, with plans to upgrade these in desperate need of expedition.

"We understand that courts and tribunals are strained to breaking, with systems that ever more people are having to try to navigate for themselves," said committee chair Bob Neill MP. "Court staff and the judiciary are trying hard to improve services in the face of underfunding and cuts."

The modernisation programme aims to transform processes and introduce aspects like more IT, and video hearings, as court and magistrates buildings continue to close. The report highlights, for instance, that half of magistrates' courts have closed, along with more than a third of county courts, between 2010 and 2018.

Moreover, users with limited access to computers, poor literacy, and limited understanding of how the law works could be left behind, and go through the justice process without any adequate legal advice.

The continued digital transformation project has run into several snags since its conception, with another committee of MPs suggesting in 2018 the government had been "cutting corners" in a bid to rush this through.

The MoJ was told that it risked botching the 1.2 billion project due to an unrealistic timetable and a lack of proper consultation. Her Majesty's Courts and Tribunal Service (HMCTS) had also not clearly explained what the changes would mean in practice.

As part of the Justice Committee's latest probe, MPs received evidence savaging the infrastructure that exists across the courts system, particularly the standard of Wi-Fi.

For example, the Common Platform, used in the Crown Court, was a source of extreme difficulty in terms of retrieving electronic documents for particular individuals, including jurors. If plans to extend this platform to magistrates' courts were to go ahead, the "wholly inadequate" Wi-Fi would further disrupt the service.

The committee has recommended there be more face-to-face advice, despite attempts to introduce remote networking into the mix, because certain court users do not have the requisite knowledge about the legal system. Paper-based processes should also be retained for people who do not have access to technology.

Although modernisation is "desperately needed" the committee was clear that it cannot come at the expense of "shutting off justice" for members of the public who will be left behind. Court buildings that haven't yet been closed should be repaired, the committee concluded, particularly aspects like video equipment and Wi-Fi, which cannot be relied upon as things stand, even for the most tech-literate.

The standard of video equipment itself is also unreliable or of poor quality, the MPs found, and HMCTS must immediately bring forward plans to upgrade the video equipment and Wi-Fi facilities throughout all criminal courts.