How to slash your office's electricity consumption 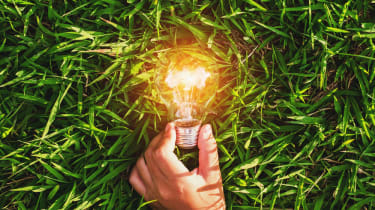 Energy prices are forever going up. And while it's possible to make savings by regularly hopping back and forth between suppliers, that's a distraction that few businesses want to deal with. Happily, there's another way to keep your electricity bills under control.

Replacing ageing hardware with energy-efficient alternatives could cut deeply into your ongoing costs and it's a move that will carry on delivering savings even if your provider raises the unit price.

Here, we take a look at some common causes of excess power use, and what you can do at the corporate level to reduce your consumption, your carbon footprint and, ultimately, your energy bill.

Desktop PCs, even excluding their standalone monitors, consume far more energy than laptops so if you can move desk-based staff onto mobile devices, you can make a saving. Naturally, there's no point doing this outside of your regular upgrade cycle, as the energy savings will be dwarfed by the residual value lost through upgrading early.

If you must use desktop displays, smaller screens with a less intense backlight can make a difference. You only need put your hand on the back of some large panel displays to recognise how much energy is being wasted as heat. While they can act as surrogate heaters in colder months, in summer they will add to your air conditioning bill.

Then there's the question of how much time your PCs spend in full-power mode. A typical PC and monitor combination could consume around 200 watts when sitting idle so if a system's left switched on 24/7, that's a cost to your business of over 230 a year.

Often, employees simply leave them switched on. If you can enforce a staff switch-off policy (or automate the process) to ensure that your desktops are only awake for eight hours a day, you could reclaim over 150 per seat.

When it comes to buying in new desktops, low-drain features such as passive cooling will reduce the need for powered fans. And if you can "downgrade" your staff to less demanding configurations overall, your savings could be considerable.

UK-based system-builder Aleutia specialises in energy-efficient PCs: packing Core i3 and i5 processors, up to 32GB of RAM, fast SSDs and integrated Wi-Fi, its systems can consume just 7.1W when idle and 21.3W under 100% load.

A laptop-first approach can still have an even greater impact, however. Apple's 12in MacBook consumes a tiny 2.7W while idling; Dell's Chromebook 13 3380 idles at 2.15W. If you need a full Windows experience, the iconic Dell XPS 13 9360 idles at 5.4W.

Desktop clients are one thing, but improving server efficiency is often more problematic. The hardware needs to be powerful, and it spends less of its time sitting idle. What's more, you can't generally power down a server out of hours.

A 2011 IBM white paper put the upper-end consumption of 1U, 2U and 4U rackmount servers at 350W, 400W and 1kW respectively, with a fully populated blade server chassis typically consuming 4.5kW. Going by these numbers, even a 1U server would cost around 400 a year, with a 4U server clocking in at 1,149 and the blade chassis topping 5,000 a year in electricity bills alone.

Those figures are upper estimates, and improvements in server technology over the past six years have brought power demands down. Even so, if you're looking to reduce your energy footprint, it's clear that the server room deserves particular attention. 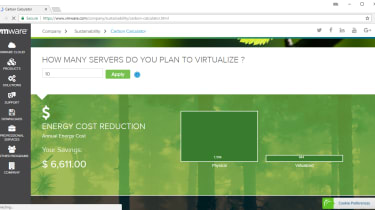 VMware offers a handy tool to calculate savings through virtualisation

One way you can make savings is by maximising use of virtualisation. If you virtualise multiple discrete environments on a 1U device, suddenly it can do the work of ten separate servers split between different departments. Smaller organisations can take advantage of the same principle without even needing to own their servers, by renting space and processor cycles on commercial shared hosting.

For ballpark numbers on potential savings, check out Abtec Network Systems' virtualisation calculator, which makes calculations based on the assumption that a typical server, with a 400W power supply, costs 650 per annum to power and cool. Swapping ten servers running single environments for one server running them all reduces the per-environment cost to 65 before staffing, maintenance and software costs are factored in.

Another illuminating site is VMware's Carbon Calculator (pictured), which suggests that virtualising ten servers could deliver energy savings of $6,611 (5,000) and offset the same amount of carbon as planting 157 trees or taking nine cars off the road.

If your office mostly runs on desktop PCs, you might not have spared much thought for Windows' built-in energy management tools. There are some powerful options here, though, which can make a real difference to your power consumption.

To access them, open the Control Panel, click through "Hardware and Sound" to Power Options, then click the Edit Plan Settings link beside your current plan, followed by "Change advanced power settings". This is where you'll find the Power Options dialog, which gives you more control than just picking Balanced, High Performance or Power Saver. 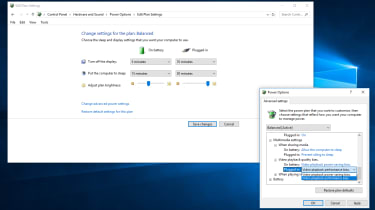 Even if you're not running on battery power, it's worth looking at Windows' energy settings

However, if you're working on a mobile device, you will find settings for both "On battery" and "Plugged in"; the former option is aimed at minimising power consumption, while the latter is skewed towards achieving the best performance.

Keep track of things such as display brightness, as super-bright screens can devour power at a shocking rate. If adaptive brightness is an option, it makes sense to use this to automatically dim the display when possible. Consider setting video playback quality to power-saving too, to reduce GPU power consumption.

If you're managing a network of Windows clients, you can push one of the three default power plans to all systems using Group Policy Editor. You'll find the setting inside the System\Power Management sub-section of the Editor's Administrative Templates. Sub-sections also give you access to sleep, display and hard disk settings, all of which can have an effect on the amount of energy a remote PC consumes.

Software developers don't generally pay a lot of attention to power-efficiency, but if you notice fans regularly spinning up when using one particular application, that's a clue that it's using more juice than it should. Consider switching to an alternative if you can.

Notably, there is one group of developers who are happy to talk about how much power their software consumes, and that's those working on browsers. It makes sense, as Microsoft calculates that Windows users spend more than half of their time on the web, so improving browser efficiency can make a big difference to power costs.

How is this done? Writing on the Chromium Blog in March 2017, Google's Alexander Timin explained that activity in background tabs accounts for a third of Chrome's power demands on the desktop which is why Chromium now limits background tabs to 1% of a single CPU core. Not only does this keep your CPU free to work on other things, it means less energy is wasted on web pages you're not looking at.

Microsoft's Brandon Heenan meanwhile responded on the Windows Blog, claiming that the Edge browser used up to 31% less power than Chrome, and up to 44% less than Firefox. Microsoft also claims that using HTML5 in preference to Flash has a positive effect on consumption.

Taking an application's power requirements into account at the point of deployment can deliver deep savings when multiplied across the client systems in an SME. Limiting user accounts so that individual staff members can't deviate from officially sanctioned choices can lock these savings in for the future.

If one of your PCs seems to be using more energy than it should perhaps its fans are constantly spinning, or a power meter indicates unexpectedly high power draw you can use a handy tool that's built into Windows to start diagnosing the cause. 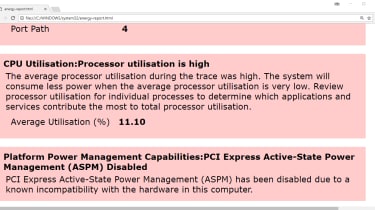 Open an elevated Command Prompt (right-click on the icon and select "Run as Administrator"), and enter "powercfg -energy" without the quotation marks. Windows will spend about 60 seconds analysing the PC's configuration and detecting anything anomalous about its power consumption. When it's finished, enter "energy-report.html" to open the results in your default browser.

The report is split into three sections: information (useful to know but safe to ignore), warnings and errors. Errors on our test machine included unusually high processor usage of 35.95% when the system was running nothing apart from background tasks. That will have a significant effect on our overall energy consumption.

Using this as a starting point, we were able to use Task Manager to try disabling various processes and services to identify the culprit and take remedial action.