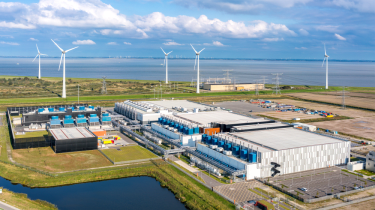 Google has announced it's achieved its goal of running all of its clouds on renewable energy - a mission it set out to complete just over a year ago.

In fact, the company has generated more green energy than it needs to power its data centres and offices from renewable sources including solar and wind power.

"Over the course of 2017, across the globe, for every kilowatt hour of electricity we consumed, we purchased a kilowatt hour of renewable energy from a wind or solar farm that was built specifically for Google," Urs Hlzle, Google's senior vice president of Technical Infrastructure said in a blog post. "This makes us the first public Cloud, and company of our size, to have achieved this feat."

Hlzle went on to explain the company is taking its responsibilities even further, entering into contracts to buy a further three gigawatts of power from renewable sources.

Not only does its investment in green energy sources mean it's making a conscious effort to reduce its carbon footprint significantly, it's also financing the green energy economy, with current contracts contributing more than $3 billion in new capital investment around the world.

However, there's still some way to go until Google is 100% run on renewable energy sources.

Although Hlzle explained the company adds a kilowatt hour of energy to the grid for every hour it spends, that may not be used to directly power its own data centres or offices, because the projects it supports may be in different geographical areas to its facilities or the power generated at a different time.

"What's important to us is that we are adding new clean energy sources to the electrical system, and that we're buying that renewable energy in the same amount as what we're consuming, globally and on an annual basis," he said.

The company explained it will continue to invest in new energy sources as demand for its products grow. It will also stay on the lookout for new opportunities to help markets where it's not currently operating renewable energy sources.

"This program has always been a first step for us, but it is an important milestone in our race to a carbon-free future," Hlzle finished. "We do want to get to a point where renewables and other carbon-free energy sources actually power our operations every hour of every day. It will take a combination of technology, policy and new deal structures to get there, but we're excited for the challenge. We can't wait to get back to work."