A faulty fridge-freezer tips Barry into a pit of despair, despite the fact he got a replacement for free 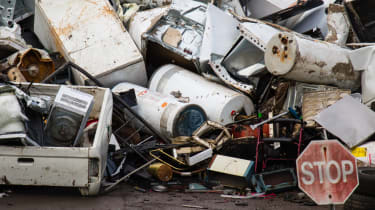 I've just scored the very definition of a pyrrhic victory. Our 16-month-old fridge-freezer packed up over the weekend.

The light came on, but the milk was about as cold as John Prescott's armpits (please don't let him be dead by the time you read this). The ice cream was merely cream. The Hotpoint was living up to its name.

Of course, the fridge only came with a one-year warranty. These days, it doesn't matter if you're spending six grand on a Mac Pro or a few hundred quid on a freezer - almost everything comes with a mere one-year warranty. That's not necessarily because they don't think it will see its second birthday (although we'll come to that), but more because there's a lucrative business in extended warranties to bump up the profit margins. And people are stupid enough to buy them.

But if you know your consumer law and are prepared to stand your ground, there's really no need for those expensive after-care packages. European legislation states that you have up to six years to claim for faults on new or even second-hand products.

Manufacturers will kick, scream and deny that this guarantee exists, but most will eventually break when you threaten to take them to court.

The long slog to assert your consumer rights starts with the call centre, of course: ao.com, which sold us our fridge, has an ingenious call system that boots you straight to the manufacturer of your product if it's older than a year. Hotpoint wanted to charge me for a repair, so I then spent the next 30 minutes cracking AO's phone system, working out exactly which combination of numbers you must press to reach an actual human being.

Then we begin the auction. AO starts by offering me a 150 after-care warranty to send out a repairman, but that's half the cost of the fridge. I'll see you in court. Okay, fine, it relents, get a repairman to fix it and we'll cover the cost.

The repair bloke turns up, opens the fridge and embarks on a nervous breakdown in my kitchen. "Fridges like this will be the death of people like me," he bemoans. "You can't repair 'em - all the components are moulded into the lining. I can't access 'em."

I get the poor fella to scribble this on a piece of tear-sodden paper, before shuffling him out of my kitchen and pressing the number of the local Samaritans into his palm.

The repair bloke says that it's unrepairable - I'll have a new fridge, please. Ah, we can repair it, says AO. We'll send out a Hotpoint specialist and split the cost with you.

Erm, no. Ah, go on. No. Go on. No. Go on. I'll see you in court. Hang on, I'll speak to my manager. Okay, you'll have a new fridge by Thursday, we'll come and pick the old one up. Deal? Deal. (The sequence of events may appear quicker in this paragraph than they did in real life.)

Despite all the wasted hours, I came off that phone call feeling pretty pleased with myself. I went in with a busted out-of-warranty fridge and came out with a brand new one - a different model to the faulty one, too. But, and this could well be the title of my autobiography, it didn't take long for the happiness to subside.

First, you don't need me to harp on about global warming, landfill, waste plastic and so on to know we are massively in the brown stuff. Yet, here's a 16-month old fridge freezer, that stands taller than I am, on its way to the tip either because it's designed to be unrepairable, or because it was cheaper and less hassle for AO to replace it than to bother with the repair. What a ridiculous waste. I would have been quite happy to have it repaired, there's a soon-to-be-redundant man in my neighbourhood with the skills to repair it, and yet the manufacturer and retailer would rather dump an almost new fridge and its noxious gases instead of letting him perform a simple fix.

And, of course, it's not only white goods manufacturers that are doing this. We're all too familiar with components glued to motherboards, laptops ruined when the keyboard breaks, sealed smartphones, printer heads that can't be cleaned, super-sized screens that are binned as soon as a pixel dies. The waste is enormous and it's at epidemic levels in the electronics industry. It has to stop now.

You may have seen recent news on the chancellor's proposed "digital tax" and how difficult it will be to implement. Can I suggest a simpler alternative? If you sell a piece of electronic hardware that can't be repaired, the VAT rate on your product should be increased to 100%.

There is no good way of disposing of all this electronic waste. We need to dispose of the notion that replace-rather-than-repair is acceptable.