Insights 2019: Epicor CEO warns against the dangers of ‘over-automating' 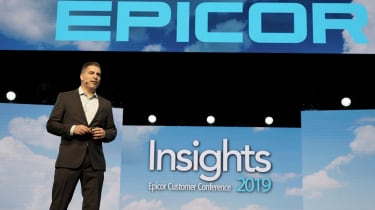 Companies should be careful not to succumb to the temptation of automating as many business processes as possible when undergoing any digital transformation projects.

Manufacturers in particular should run any artificial intelligence (AI) projects through a 'litmus test' that asks whether or not this would augment human employees' functions or cause volatility, according to Epicor's CEO Steve Murphy.

"Investment in plant products, equipment, automating, building software at the process level is done because of a shortage of skills, or because labour's too expensive," Murphy said in his keynote address at Epicor's annual Insights conference, hosted this year in Las Vegas.

But there is such a thing as 'over-automation', with innovation and technological advancements actually leading to disruption and volatility in markets.

One key example of this, Murphy outlined, was by way of Tesla's Fremont plant in California, which features an almost-entirely automated manufacturing process. But, as a result of this, the plant sustained a severe manufacturing shortage last year.

"The cougar robots that work the line; people don't even get within ten metres, in some cases, of the cars being built," he told delegates during his keynote. "That's a case where it was probably taken too far."

The way Tesla CEO Elon Musk verbalised this, Murphy continued, was "I underestimated the value of human beings", which is another way of saying "I over-automated the plant".

"My counsel to my peer group here is that technology, as far as how much you use and how much you embed into the process, should be embedded to the degree that you can be competitive but no more so. That's it," said Murphy.

"If you go beyond that, and you've got a feature or function or something you can't make use of, you've gone too far. And in many cases you build a degree of rigidity and complexity in the system that doesn't work in your favour."

One further example of how innovation has led to curious cases of market volatility include the highly shortened release cycles for smartphones.

Apple and rival Android manufacturers like Huawei and Samsung are able to issue several releases per year. This, in turn, leads to wild pricing patterns that have a knock-on effect on other markets; figuratively-speaking the cost of a handset on day one could be $2000, for example, and half that price on day two.

Murphy added that if AI and automation can't allow a user to be more effective in their existing roles, then businesses would have to ask themselves what the point in deploying this new technology is.