View from the airport: Epicor Insights 2019 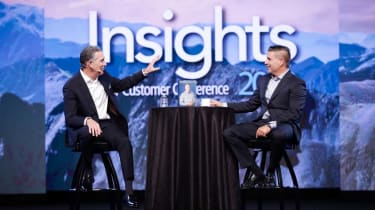 Manufacturing, lumber, distribution; these kinds of industries have been around for hundreds of years, and those who run companies in these sectors are used to doing things a certain way. Change is slow and, if business is good, can be seen as more of a risk than an opportunity.

This is the challenge that enterprise resource planning (ERP) firm Epicor aimed to tackle as it entered into its annual Insights conference, hosted this year at Mandalay Bay in Las Vegas. And, if the company's executives are to be believed, the migration of its flagship product line-up to the public cloud is certainly the future.

This could lead to new technological possibilities, their message says, with the biggest announcements last week centring on enhanced ERP functionality prefaced by a stronger partnership with Microsoft's Azure platform.

The most eye-catching of these was the Epicor Virtual Agent (EVA), an AI-powered digital assistant that the company's chief product and technology officer Himanshu Pulsale insisted wasn't "just a chatbot". Epicor's big bet on the cloud was also met with a commitment to something it calls the 'connected enterprise', or in other words letting Internet of Things (IoT) devices loose across the factory floor. But this direction of travel hasn't been embraced as warmly among a significant chunk of Epicor customers.

Just a few years ago the company was in rocky waters under its previous leadership, adopting a defensive mentality with regards to its customers, and almost apologising when they integrated any new tech into their products. But now the company is banging the drum for digital transformation and, in particular, public cloud migration.

Epicor has embarked on a decisive drive to communicate these benefits to a sceptical customer base, a small proportion of which have no interest in pursuing cloud technology whatsoever.

The software giant places the number of its customers still using Epicor ERP 9, released almost a decade ago, and similarly outdated software at roughly under 500 of 3,000 in the manufacturing space. Moreover, questions often asked throughout the conference ran along the lines of "do I need to be on cloud to use this feature or can I get it with on-prem as well?".

One of the deepest concerns among a more older generation of customers, as Epicor sees it, is that they're being forced into using the cloud against their wishes. They are, in fact, quite comfortable with how their infrastructure sits right now. The biggest worry for Epicor is they'll sit on whatever system they have for as long as possible, and then look at rival options - instead of upgrading - when the software is no longer supported.

Meanwhile, although Epicor's leadership would say they're ahead of the curve tech-wise, or at least on par with their weightier rivals (the likes of Oracle and SAP), they'd also concede this conflict has held them back. Painful upgrades and software flaws, among other issues, have clouded the company's past.

But the overall tone at Insights 2019 was one of optimism, as Epicor seeks to finally hit the elusive billion-dollar-company mark within the next 12 months. The defensive mentality of old has been discarded, with a more proactive one picked up in its place.

But reckoning with the pace of growth has posed another headache. Epicor is a much larger firm than it was several years ago, but many of the internal processes are still unchanged from that of a small business. Internal change remains a learning process, and executives are finding they can't whip up their conference speech a day before their keynote anymore.

These next 12 months will be especially interesting for a software firm that has put its chips on the table for public cloud. Epicor's main predicament in future will centre on wrestling with legacy attitudes among a significant minority of customers while trying to keep its tech as fresh as the biggest players in ERP.