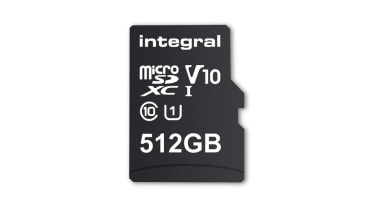 The new card surpasses the previous record holder SanDisk, which claimed the title with a 400GB model back in August last year. Sandisk's 400GB card is still faster than Integral's higher-capacity unit, however, with a maximum data transfer speed of 100MB/sec compared to Integral's 80MB/sec maximum.

"Consumers have been clear in their call for increased storage, as mobile devices have become essential to many in everyday life," said James Danton, marketing manager for Integral.

"The need to provide extended memory for smartphones, tablets and a growing range of other mobile devices such as action cams and drones has been answered. As a company, we are very proud to be the first to achieve the 512GB capacity milestone in microSDXC, worldwide".

The release marks a watershed moment in mobile storage, as users are now able to outfit their smartphones with a storage capacity equal to (if not greater than) most laptop SSDs. The new card also meets the V10 video speed class standard, meaning that it's capable of recording and playing back 4K video with no issues.

This is worth noting, as although cloud storage has become mainstream in recent years, the continuing advancement of smartphone camera technology has let to users generating higher and higher quantities of data on a regular basis.

Integral's new microSD card will go on sale next month, and while the company currently hasn't released any pricing, it's all but guaranteed to fetch upwards of 200, as SanDisk's smaller card generally commands a price of around 220.