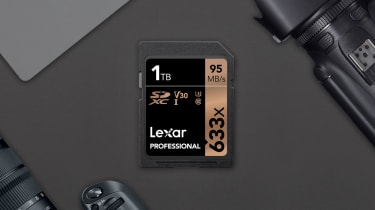 The 1TB Lexar Professional 633x SDXC UHS-I card has been designed to fit into mid-range DSLRs, HD camcorders, or 3D cameras with read speeds of up to 95MBps.

Next-generation Ultra High Speed-II technology is faster, with speeds of up to 300MBps, but 1TB capacities aren't available yet, making Lexar's card a happy medium for those that need the capacity and speed.

Combined with UHS-I technology that supports high-speed data transfers, even large files record quickly to the card, meaning there's no latency whether you're shooting HD video footage or large-format pictures.

He explained the company decided to launch its high capacity flash storage cards to support the demands of customers.

"As consumers continue to demand greater storage for their cameras, the combination of high-speed performance with a 1TB option now offers a solution for content creators who shoot large volumes of high-resolution images and 4K video," he explained.

Lexar is the first company to formally unveil a 1TB storage card. Although SanDisk said it would be launching one back in 2016, it's still yet to go on sale.