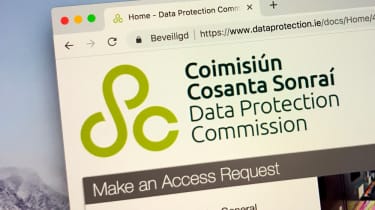 The Irish Data Protection Commissioner (DPC) is investigating several organisations after a filmmaker filed an official General Data Protection Regulation (GDPR) complaint against them for misspelling his name.

Director and producer Ciarn Cofaigh complained against Ireland's Health Service Executive (HSE) to the data regulator after medics at University Hospital Galway told him they could not use the 'sneadh fada' when spelling his name.

The basis of the complaint is Article 16 under GDPR, right to rectification, which states an individual has the right to request that any inaccurate personal data held by an organisation is corrected without delay. This is closely linked with the accuracy principle under Article 5.

Cofaigh, 51, argues that recording his name in a database without the fada, an acute accent used to mark an elongated vowel, when spelling his name amounts to recording data inaccurately.

He has also filed similar complaints against the Bank of Ireland, as well as its subsidiary New Ireland Assurance, according to the Irish Examiner.

Cofaigh told the Irish Examiner that fadas on Irish names are "not an optional extra or a pretentious affectation", adding: "They are a central, functional element of a person's proper name. My name without a fada isn't my name."

"I'm tired and fed up with the hypocrisy of the State and its odd relationship with the language. They claim it is important yet when it comes to the nitty gritty, it is of no importance."

The Irish DPC is now considering the matter, in consultations with European regulators as well as Ireland's Language Commissioner, to establish an official position.

"We are examining the issue around fadas as published in some of today's media," an Irish DPC spokesperson said. "The examination into the issue is ongoing."

The dispute could have implications for a wide swathe of private and public sector organisations not just in terms of the fada, but any accented vowel or consonant denoted within an individual's name.

If found to constitute a violation, it could mean that firms will not only need to correct their own records but upgrade their software to one that is compatible with a wide range of additional characters.

An HSE spokesperson told IT Pro its systems were unable to record Cofaigh's name as he had wished due to this specific reason, acknowledging there is an issue with inserting the fada on computer software used in some locations.

"The HSE accepts that the sneadh fada is not an optional extra that may be inserted or omitted at random or as one chooses; it is a central component of the structure of the language," the spokesperson said.

"A sneadh fada, which is necessary to spell words properly, is an integral part of a person's given name and surname in Irish. The HSE is taking steps to ensure that, where it is possible, new software will have the capability to input the sneadh fada."

IT Pro also approached the Bank of Ireland for comment.