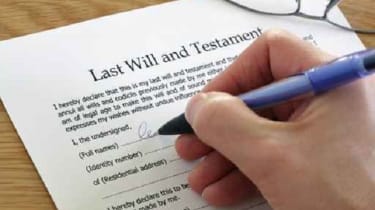 "You can't take it with you when you die," the old adage says. But, when it comes to leaving our digital assets to our nearest and dearest, it seems you can't pass them on either. Depending on who consumers buy their e-books, MP3s and movie downloads from, the right to use these digital assets often expires when the person who buys them dies. Therefore, it's often legally impossible to pass them on.

As far as I understand it, these are license agreements, not purchase agreements. And, as a result...that license terminates on death.

"The long and the short of it is you're borrowing the music or books you buy from iTunes or on a Kindle," Keith Etherington, a solicitor from family law specialists Slater & Gordon, tells IT Pro.

Before you can start taking steps to preserve your digital legacy, you need to take stock of what accounts you have and their contents, advises Emma Myers, head of wills, probate and lifetime planning at Saga Legal.

"[We] recommend creating a directory of all online accounts (excluding passwords for reasons of security), which is stored with your will," she explains. "This means next of kin will find it much easier to locate all your accounts."

For on-premise assets, locked up in laptops or stored on tablets, Simon Lewey, a partner at family law firm Cripps Law, says there are organisations who will store device passwords until someone dies and then disclose them to select parties afterwards.

Alternatively, people could store these details with their wills and leave them in the care of their solicitor instead, he suggests. "I've got one client who has given me, to keep physically with his will, a piece of paper in a sealed envelope, with the passwords to his PC," Lewey reveals. "He feels that's a good way of ensuring I can get to that [data], and unlock it."

"As far as I understand it, these are license agreements, not purchase agreements. And, as a result...that license terminates on death." This may come as a surprise and shock to some, particularly when they total up how much money they're likely to spend on accruing these digital assets during their lifetimes. "You might spend 20,000 on iTunes over your lifetime, but once you die, that's it. Apple keeps your money and no-one else gets to listen to the music," Etherington adds. IT Pro raised this point with Apple and the company confirmed it's not possible to "legally bequeath" an iTunes library to someone, as per its terms and conditions. However, Apple did say it is possible to make it accessible to others after the owner's death. This involves contacting iTunes customer services and asking them to transfer ownership of the account to another person who must provide a copy of the deceased's death certificate and a legal document confirming they have the right to take over the account. Alternatively, as Etherington points out, a person could simply pass on their iTunes login details to whoever they want to have access to it after death. Failing to do so won't just stop loved ones accessing your iTunes library, but could also prevent them from accessing an iPad or iPhone that's been passed on too. That's a situation Josh Grant has found himself in after his late mother bequeathed her two-year-old iPad to her family in her will. Since her death from cancer at the age of 59, they've been unable to use it because they do not know her Apple ID and password. Grant told the BBC he was asked by Apple to provide written consent from his mother for the device to be unlocked. "We obviously couldn't get written permission because mum has died. So my brother has been back and forth with Apple. They're asking for some kind proof that he can have the iPad," Grant says. "We've provided the death certificate, will and solicitors letter, but it wasn't enough. They've now asked for a court order to prove that Mum was the owner of the iPad and the iTunes account. "It's going to have to go through our solicitor and he charges 200 an hour, so it's a bit of a false economy," he adds.

Since news of this story first came to light, Apple has responded to the family's request to access the device and restored the factory settings.