Nokia has launched its latest flagship at MWC, but can it hold its own against the Galaxy S8? 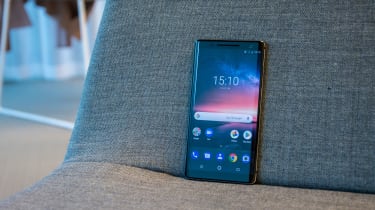 Last year saw the return of possibly one of the most unlikely ex-players in the smartphone industry, with Nokia bursting back onto the scene to almost universal surprise. Even more surprising was that the devices it launched in 2017 were actually really rather good, with the Nokia 8 being a particular highlight.

Its lineup was so impressive, in fact, that Nokia went from a standing start to become the third most popular smartphone brand in the UK, according to Counterpoint Research. Now, Nokia's parent company, HMD, is looking to build on its initial successes with a huge slate of new releases. Alongside multiple mid-range devices and feature phones, the company is launching the Nokia 8 Sirocco, a partial follow-up to last year's flagship, the Nokia 8.

Nokia has jumped on the ultra-slim bezel bandwagon, fitting the Sirocco with a screen that covers 95% of its front. As with basically all of the edge-to-edge displays we've seen, it gives the phone an eye-catching and attractive look, and gives the impression of a seamless whole - particularly given that the Gorilla Glass 5 screen has been 'vacuum-molded' to curve around the edges of the device.

The phone's actual chassis is constructed from a single block of solid stainless steel, tapering from 7.5mm thick at its widest point to less than 2mm thick where the glass front meets the polished black rear. 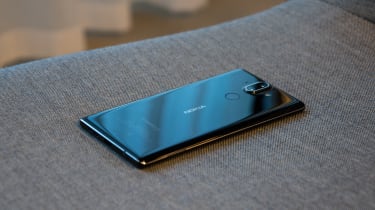 These edges are diamond-cut, and while the result is aesthetically pleasing, it makes the device somewhat uncomfortable to hold, as the edges have a tendency to dig into the palm. This feels like a fairly major problem, and one that really should have been addressed during QA testing. Still, it really is a lovely-looking phone, and by far the most impressive-looking device that Nokia has put out in years.

As we mentioned, Nokia has joined the likes of Honor, Samsung and OnePlus in launching a smartphone with an edge-to-edge display, and it hasn't scrimped on quality. The 5.5in OLED panel has a 2K resolution, and is also one of the growing number of phones to use the 18:9 aspect ratio, which is taller and thinner than the traditional 16:9 ratio used in previous devices.

The screen itself looks high-quality, with rich colours, good brightness and clear visuals. We'll know more once we can run some proper tests on it, but early impressions are good, and we're reasonably confident that it'll deliver when we examine it more closely.

We were expecting most of the smartphones announced at MWC to make use of the latest Qualcomm processor, the Snapdragon 845. Surprisingly, Nokia has not done this. Instead, the Sirocco is fitted with a Snapdragon 835 - a processor from last year, seen on devices like the OnePlus 5T. 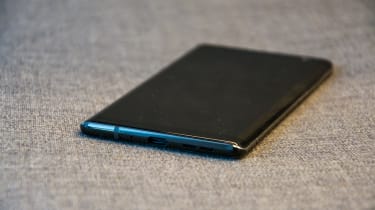 While we can't say much about the device's performance without being able to fully test it, we'd be very surprised if it wasn't outclassed by the latest handsets from rival manufacturers. Whether or not it's underpowered is a different matter, however; last year's Galaxy S8 is still more than powerful enough to cope with anything the average user is likely to throw at it, after all.

Elsewhere, the Sirocco features 6GB of RAM and a whopping 128GB of internal storage, which is further expandable via microSD card. It uses a 3,260mAh battery too, which should combine with the lower-powered processor to result in a very capable battery life.

As we'd expect from any major smartphone, the Sirocco comes with IP67 waterproofing, and as an extra bonus, you also get wireless charging for extra convenience. There's a fingerprint reader located below the rear camera, too.

Speaking of cameras, Nokia has used a dual-lens camera for the Sirocco. This is made up of a 12-megapixel lens paired with a 13-megapixel telephoto lens, which should result in great-looking photos - the camera was one of the Nokia 8's highlights, and we're expecting good things from this one, too.

The Nokia 8 Sirocca undoubtedly looks like an elegant and impressive follow-up to last year's Nokia 8. We have some slight concerns about the fact that it's using a last-gen processor, but this should also result in a slightly better battery life than if Nokia had opted for a more recent chip. 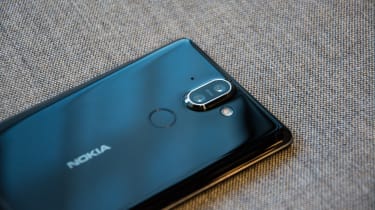 It's priced slightly lower than most other 2018 flagships, too, costing 749 (which equates to 659). On the other hand, however, you can pick up a Galaxy S8 from Samsung for not much more than that, so Nokia is basically pitting the Sirocco against the best phone of last year. We're not entirely convinced it's going to come out on top in that fight.